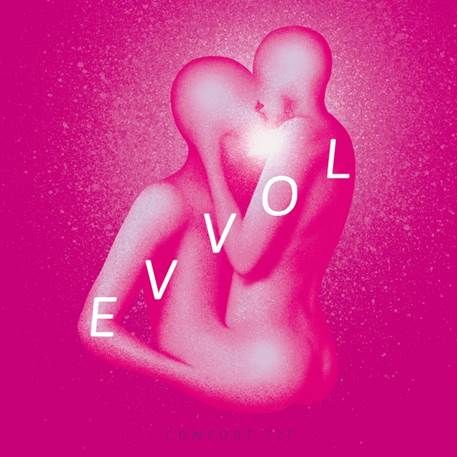 Since returning from European live runs with both Peaches and YACHT, Berlin-based darkwave-pop duo Evvol have spent the past few months holed up in their Kreuzberg studio writing the follow-up to last year’s critically acclaimed debut ‘Eternalism.’ ‘Physical L.U.V’ (!K7 Records) is the result – a dense, ethereal and very personal EP, documenting the physical and emotional comforts and constraints of love.

"Originally we had decided on a different song for this ep release but had a last minute change of mind after we wrote Comfort Fit, as the title suggests it's pretty much about when you find that special person and everything – physically, mentally, sexually and spiritually,  just fits right” Evvol

Formed in 2014 from the ashes of previous musical projects and having rekindled their fractured relationship, Evvol – AKA Irish singer Julie Chance and Australian multi-instrumentalist Jane Arnison – embarked on a new and revitalised direction. Debut full-length ‘Eternalism’ was the sound of commercial pop fused with arty electronica, dripping with industrial charm and evoking Berlin’s seedy underbelly. Under a former moniker they have previously toured the world with Austra, and shared the stage with Grimes, Peaches and TRUST.

Less than a year after announcing their debut album to the world, Evvol look set to pick up the electronic-pop mantle and make 2016 their own. They play The Garage in London on 14th May to mark the release of ‘Physical L.U.V.'