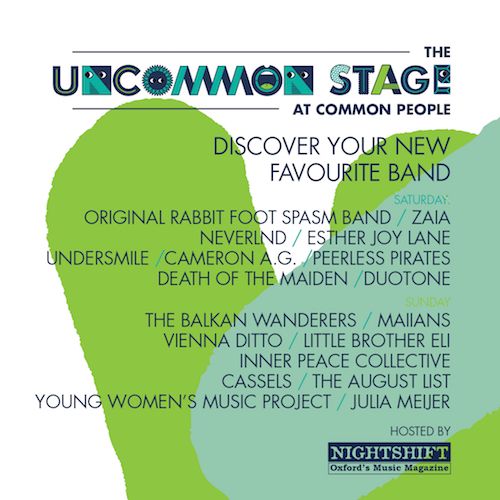 Continuing our mission to connect like-minded party people on common land, the Common People team are very pleased to announce the line-ups for our Uncommon Stage. Flexing his all-encompassing musical muscles Rob da Bank has joined forces with legendary, longstanding music publication Nightshift in Oxford and acclaimed venue The Joiners in Southampton, to bring you the cream of the up-and-coming music scene, featuring some of the most exciting new and underground bands, this coming May Bank Holiday at South Park and Southampton Common.

Common People curator Rob da Bank says: “The beating heart of all our festival adventures is getting people to discover new music and uncover new bands. Our curators, Ricky from The Joiners in Southampton and Ronan from the seminal Nightshift magazine, are experts in these matters, so please be upstanding and make much noise for The Uncommon Stage.”

Nightshift’s Ronan Munro says: “It’s fantastic that so many local acts are getting the opportunity to play at Common People, with the opportunity to play to a whole new audience, and it’s great that we get the chance to show the variety of music that comes out of Oxfordshire – from hot jazz, reggae, hip hop and blues to doom metal, electronica, punk and even pirate pop. I’ve always tried to make musicians proud to come from Oxfordshire, and Oxfordshire be proud of its musicians and this weekend is proof that Oxfordshire is home to a wealth of music talent”.

The Joiners’ Ricky Bates says: “We at the Joiners are utterly thrilled to be directly presenting the Uncommon Stage this year with some of our favourite touring acts of old and new in one space! Plus, we have some amazing home grown local talent throughout the day covering everything from ska to metalcore to indie rock n’ roll across the weekend, it’s going to be the most righteous fun weekend, don’t stay in! See you down the front”.

On Southampton Common, Saturday’s dazzling new sounds will come courtesy of much admired Cambridge five-piece Lonely the Brave and experimental Brightonians Tall Ships, with sets from singer-songwriter Sean Mcgowan, stadium-ready post rockers New Desert Blues and BBC 6 Music-supported Bel Esprit, all of whom hail from Southampton. There will also be live music from the Isle of Wight’s math-pop four-piece Signals and the home turf triumvirate of Our Hollow, Our Home, Elixir and Vicki Musselwhite, with the first of our soon to be announced I Want to Play at Common People winners also making an appearance.

Sunday will see NME-championed Palma Violets topping a bill that will include garage rockers Pretty Vicious, Portsmouth’s Kassassin Street, and a cavalcade of local heroes including Science of Eight Limbs, The Rising, Bigtopp, These Septic Stars and Cassava, with two more I Want to Play at Common People winners completing the line-up.

Grab your tickets now at www.commonpeople.net