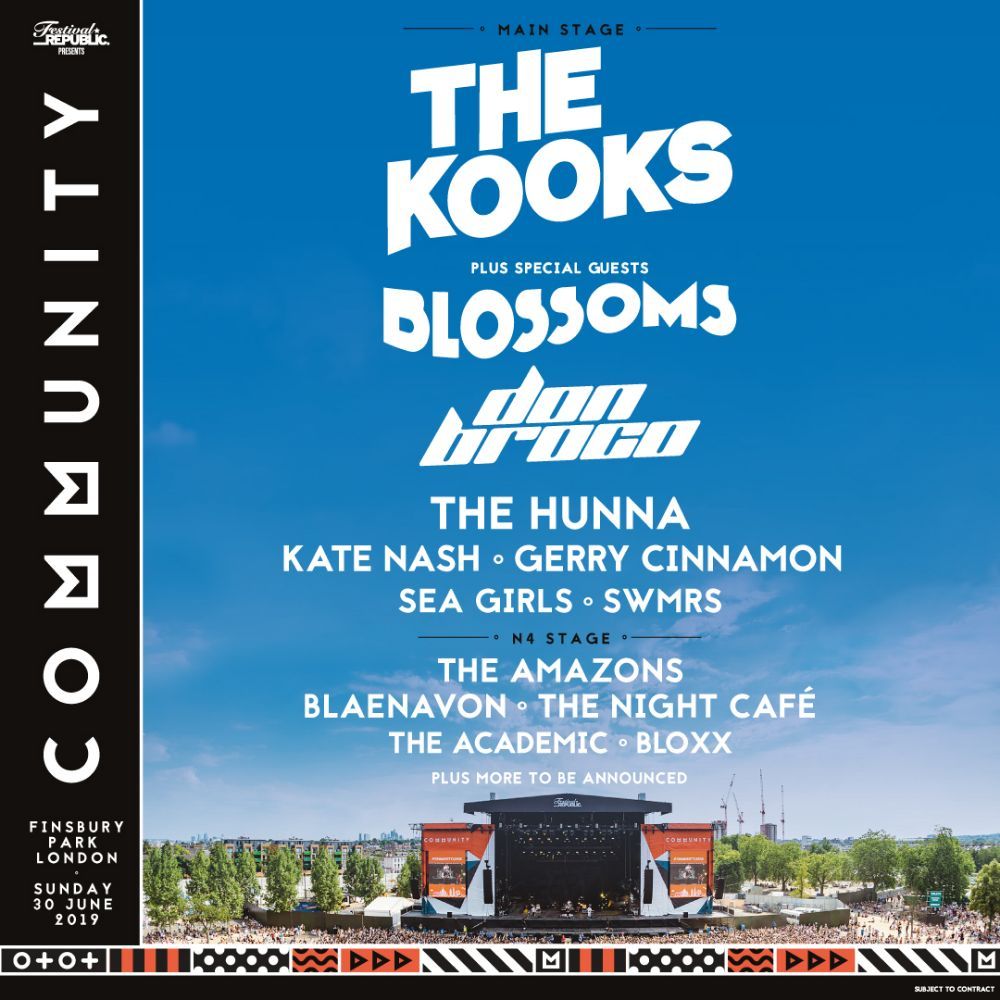 Standing as the ultimate summer celebration of modern guitar music and indie fun, Community Festival is brimming with the perfect soundtrack for a true summer festival moment – with more names announced today joining the likes of The Kooks, Blossoms, Kate Nash, The Amazons, Gerry Cinnamon and more at London’s Finsbury Park on Sunday June 30th.

A true phenomenon in British rock, Don Broco have built their way to the very top across three infectious studio albums. Lead by the powerhouse presence of frontman Rob Damiani, they stand as one of the most in-demand live acts in the country – taking over arenas with hits including ‘Automatic’, ‘Everybody’, ‘Pretty’, ‘T-Shirt Song’ and more. Fresh from a headline night at London’s Wembley Arena, get ready for a high-octane show stealer.

Speaking about joining the Community lineup, Don Broco said:
“Really excited to be playing a Community Festival this year! Always such a good line up and this year is no different!”

Through word of mouth hype and a devoted following, The Hunna have arguably become one of the most talked about bands in British guitar music. After storming the charts with debut album ‘100’, second album ‘Dare’ followed this with a fury of pop hooks – with their appearance at Community this year bound to elicit unrivalled scenes as The Hunna continue their march.

One of the most critically admired breakthrough bands of the past five years,Blaenavon will take their spot on the Community bill as they prepare to embark on their exciting next chapter. Combining intricate and devastatingly raw emotion with ferocious bite, their debut album ‘That’s Your Lot’ saw them catapulted around the country and with new album ‘Everything That Makes You Happy’ set to land this year, expect Community to be a thrilling celebration from a true live force.

Blaenavon commented on Community Festival 2019, saying:
“Can’t wait for this one! A festival we’ve been big fans of for a while. Gonna be pretty special blasting out the new tunes at Finsbury Park! Let’s hope for some sun x"

Finishing up this announcement are US punk upstarts SWMRS, who have proved themselves as one of the most exciting, vital acts on the scene at the moment. With the release of their sophomore album ‘Berkeley’s on Fire’ set for next month via the iconic Fuelled By Ramen.

These new names join a storming lineup of indie icons and new favourites all making their mark at Community 2019, headlined by The Kooks as they play the largest headline show of their career full of globally renowned anthems. With special guests Blossoms taking the stage hot off the back of a mammoth 2018 alongside independent trailblazer Kate Nash, ‘Black Magic’ statement makers The Amazons, the phenomenon that is Gerry Cinnamon (in what’s sure to be one of the most memorable festival sets of the year) and a slew of the most exciting new bands bound to be taking pride of place for thousands of indie fans up and down the country (including Sound Of nominees Sea Girls, The Night Cafe, Bloxx and The Academic) – Community Festival 2019 is the only destination needed for a true World Cup of indie.

Community Festival is a one-day celebration of the best in new music. Last year’s event was headlined by Two Door Cinema Club and saw 37,500 music fans enjoy one of the hottest music shows of the summer. Catfish and the Bottlemen also headlined the debut sold out show in 2017. With even more memories set to be made in 2019, Community Festival is the go-to destination for a summer celebration of indie.

Tickets for the one-day music festival Community are priced at £40 (booking fees apply) and on sale now
www.Communityfestival.london