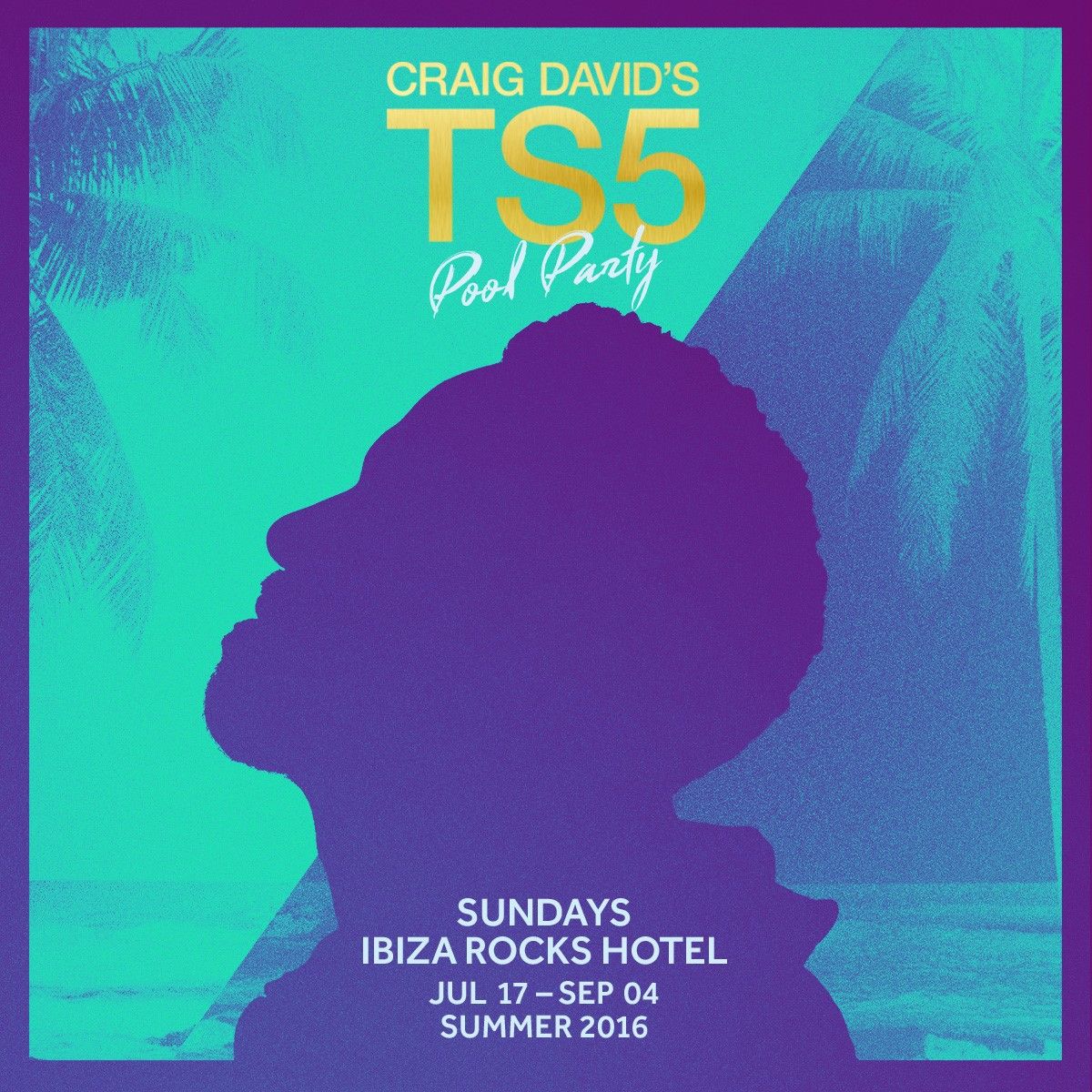 As the end of a phenomenal 10th Birthday year for Ibiza Rocks approaches, plans are well underway for 2016 and for a brand new pool party residency from the platinum album-selling pioneer of UK Garage and RnB, Craig David. The glorious revival of one of the UK’s finest talents is more than enough reason to celebrate so in keeping with the sun-soaked party vibes created at his home in South Beach Miami, Craig David’s TS5 is Balearic bound for a daytime pool party residency at the Ibiza Rocks Hotel every Sunday from 17th July to 4th September (1-8pm).

TS5 started out as the most exclusive pre-party in Miami hosted by Craig at his penthouse home where he went from playing to 10 friends to hundreds as word spread, the party organically grew and the TS5 brand went international. With Craig’s ability to sing, MC and work the crowd while DJing simultaneously, fans can expect sets combining massive old school anthems from RnB to Swing, Garage to Bashment and sun-soaked House.

Having started out as a DJ before launching his solo career, Craig David went on to sell over 13 million albums, secured 13 Top ten hits and achieved multi-platinum status in more than 20 countries. Now fifteen years since his seminal debut ‘Born To Do It’, Craig is back in a BIG way thanks to the viral video sensation of the year.  His electric appearance on MistaJam’s  #60MinutesLive Takeover with Kurupt FM, Big Narstie and Stormzy amassed 3.5 million views in just 24 hours and the desire for Craig David has been on overdrive since.

From closing down the stage at this year’s Notting Hill Carnival, blowing the roof off Fabric’s 16th Birthday, sending the crowd insane by appearing at Bestival and with Major Lazer at Alexandra Palace to collaborating with the likes of Chase & Status, Diplo, Goldlink, Kaytranada, Bonkaz, Katy B and Shy FX.  There’s also been sold out TS5 shows at East London’s Oslo and Shapes and a weekly primetime TS5 show every Friday on Capital Xtra. With supreme praise coming in hard and fast for new track ‘When the Bassline Drops’ with grime MC Big Narstie, it’s clear that the unstoppable rise again of Craig David is much more than just nostalgia. Craig David is back in the game and the best is yet to come this summer.

Craig David said: ‘For years I’ve been visiting Ibiza and have loved the energy of the place, so to bring my very own TS5 pool party to the hottest summer spot on the island excites me beyond belief. I’ll be bringing that RnB, Hip Hop and Garage flavour to balance out the incredible dance scene, bringing a fresh way of delivering a genre of music that is so close to my heart, to an island that is so magical. Working with Ibiza Rocks to bring the vibe of my Miami house parties, and the craziness of my East London nights to what will be THE pool party of the summer has been incredible, and I can’t wait for it to go off!!’

Jordan Hallpike, Head of Talent & Programming said: ‘Craig influenced a scene and a culture that the UK can proudly call it’s own and took the sound of UK RnB and Garage to a global audience. That’s reflected in  the music being made today by many of the incredible new artists and producers he’s now working with. It’s testament to what a huge international star Craig David really is. Not only do we admire everything he’s achieved, we’re excited about what’s to come and Ibiza Rocks Hotel is the perfect place for the next chapter of TS5 and for a seriously hot party.’

Tickets will go onsale soon.  Sign up to be the first to know more at www.ibizarocks.com/craigdavid

For holidays book direct with Ibiza Rocks for the best prices guaranteed. Up to 15% off on bookings made before 31/12/15.  7 nights accommodation plus tickets to Ibiza Rocks, W.A.R! and Craig David’s TS5 Pool Party from £204pp.