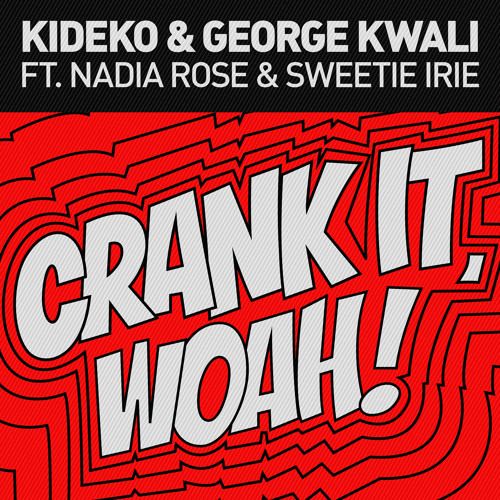 Kideko & George Kwali feat. Nadia Rose & Sweetie Irie’s ‘Crank It’ is the new vocal version of one of this year’s biggest records. Now with Nadia Rose and Sweetie Irie on board expect this to dominate charts and playlists for the rest of the year. Released on streaming and download services on 5th August via Ministry of Sound, the new radio edit was premiered by Annie Mac live on Radio 1 from Ibiza as her Hottest Record In The World (4/8)

Hailing from Brighton, young British producer Kideko has unleashed two underground anthems in the shape of ‘The Jam’ and ‘Crank It’ in the past 12 months. Kideko’s part of the UK’s growing homegrown house scene alongside fellow Brightonian, George Kwali, together they’ve gathered critical acclaim and support for their productions from Oliver Heldens, The Magician, Blonde, Fatboy Slim, Gorgon City, Danny Howard, MistaJam, Pete Tong, Subsoul, Eton Messy, and beyond. Although they’re not a duo, Kideko and Kwali are working together in the studio on new productions and remixes, including the new single from Adam F & Kokiri. They’ll play Ministry of Sound in October, with further live dates to be announced.

23 year old Nadia Rose is the multi faceted female rapper on everyone’s radar. Freshly signed to Sony/Relentless, her single ‘Skwod’ is a blistering example of her authentic and individual sound. This summer Nadia’s performed at Glastonbury, The Great Escape, Wireless’ main stage, and appeared alongside Alicia Keys, Section Boyz, Anderson Paak, Busta Rhymes, and her cousin Stormzy. With hip hop as her starting point, she’s evolved into a multi-genre artist and one of British music’s most exciting prospects.

Reggae legend, Sweetie Irie, has travelled the world performing at events such as Jamaican Sunsplash, Notting Hill Carnival, international shows in Grenada, Trinidad and beyond. He’s collaborated with Maxi Priest, Ms Dynamite, No Doubt, Spee, Specialist Moss, Gorillaz and Gwen Stefani, and made a considerable mark on the UK garage scene via ‘Extra Extra’, ‘Holy Morning’ the Battle of the M.C's track, ‘Bite Dem Up’.