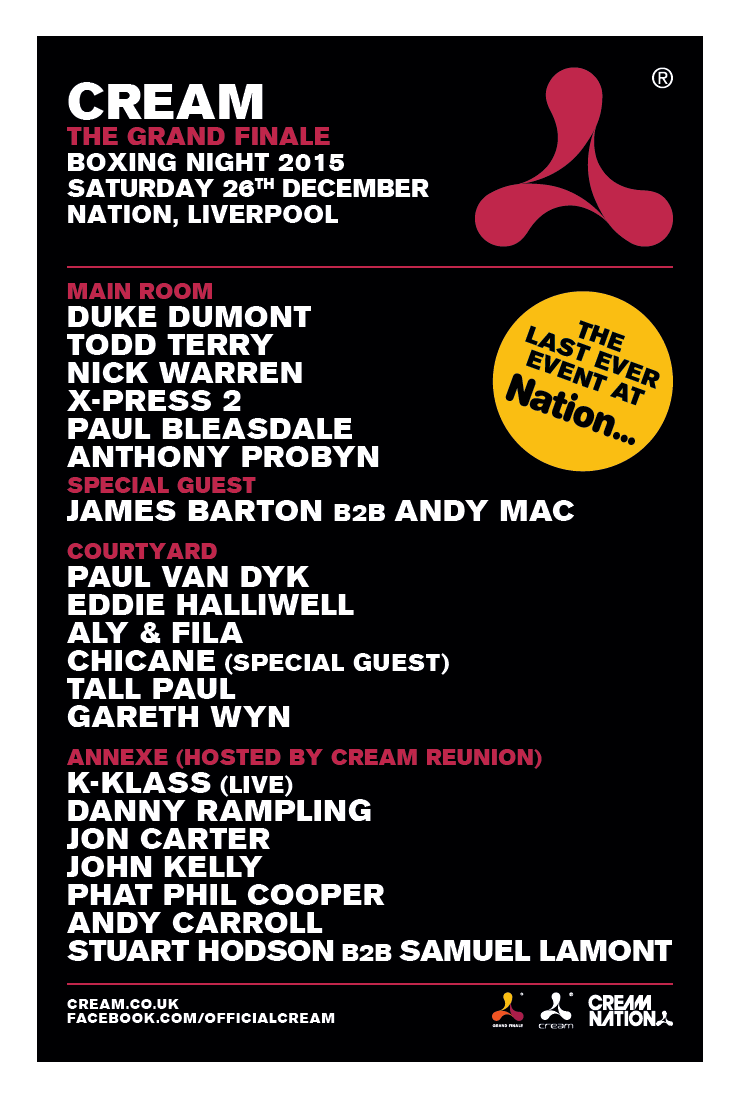 It’s the big one…the one we’ve all been waiting for, the final send off for Cream’s beloved home Nation.   They say home is where the heart is and judging by the atmosphere and emotions running high on Saturday for the first of its finale parties there has never been a truer statement.  For all those who have passed through its doors over the last 23 years you are part of the success story and the legacy it leaves behind that has made ‘Nation’ one of the world’s most iconic club venues.  So it’s only right that the ‘old girl gets the send-off she deserves and non-surprisingly Cream have pulled together a suitably fitting line up that reflects the clubs history over the last 2 decades.

First up in the Main Room is one of the scenes hottest DJ/Producers and Blasé Boys Club label boss Duke Dumont, the Grammy nominated artist famed for  #1 hits like ‘Need You’ and ‘I Got You’ will undoubtedly tick the box for the deep house collective.  Next up is a true dance music legend Todd Terry, responsible for some of the biggest ‘house’ tracks over the last 30 years, watch this master at work when he takes to the decks on Boxing night for what is set to be a performance that will go down in history.  Completing the Main Room line up are a roster of Cream’s legendary residents including Nick Warren, X-Press 2, Paul Bleasdale, Anthony Probyn and of course no Cream closing would be complete without the man who started it all James Barton who just can’t resist being part of this unmissable event, he will be performing a very special set back to back with Cream resident Andy Mac.

Over in the Courtyard there is a true legend at the helm and one that needs little introduction Mr Paul van Dyk.  As Cream Ibiza resident he has Amnesia’s main room in the palm of his hand so it’s only fitting that one of the most in-demand trance DJ’s on the circuit joins us for this farewell party.  Joining him will be Eddie Halliwell, this year’s Cream Ibiza residents Aly and Fila, a special guest performance from Chicane, Tall Paul and Gareth Wyn.

Over in the Annexe, the room where the story began all those years ago are some of the legendary names that have performed for Cream over the years, first up is a live performance from K-Klass, and if you caught there set on Saturday at Part 1’s Grand Finale, you know you’re in for a treat.  Next up is Danny Rampling one of the original house music pioneers who lit the ‘fuse’ back in the late 80’s. Of course, no finale would be complete without Jon Carter, a ‘Nation’ regular who’s performed at Nation under the ‘Cream’ and ‘Bugged Out’ banners. Completing the Annexe line up is Phat Phil Cooper, Andy Carroll, and Cream reunion residents performing back to back Stuart Hodson & Samuel Lamont.

The end is near folks, miss this event at your peril! And so its with a heavy heart we say Goodbye Nation but thank you for the good times.

This event will sell out and we urge you to purchase advance tickets as soon as possible to avoid disappointment.   Tickets on sale now!