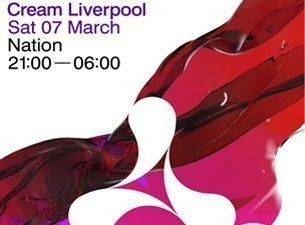 With Boxing Night close to sell out Cream are already preparing for the new year ahead and have announced the line-up for their first shindig of 2015 at Nation.

Cream returns on Saturday 7th March with a line up guaranteed to blow off them winter blues and nobody more so is capable of doing that than Erick Morillo!  Making a long awaited return to his Liverpool clubbing roots, this legendary DJ icon is back, expect a rough and tough set of underground beats, the sound he is famed for. Joining him in the Main Room is Dutchman Sander van Doorn, who is without doubt one of the world’s most essential and influential DJ/Producers in dance music today, with two full length albums, numerous hit records, his own successful label ‘Doorn Records’ and remixer to some of the world’s biggest artists, this will be one set not to miss. Next up is Dutch duo Sunnery James & Ryan Marciano, few DJ’s embody dance music as fully as these guys, always favourites with the Cream crowd, they never fail to take the party to the next level, expect the usual hair flopping and body rockin’ beats, plus even more hands in the air frivolity as we welcome back BBC Radio 1’s Danny Howard and Cream Resident Gareth Wyn.

As if the main room line up wasn’t mouth watering enough, next up is the Courtyard and headlining is an artist who needs little introduction, as one of the original breed of Dutch dance maestros we welcome back Ferry Corsten.  Next up is Aly & Fila, the famed duo DJ/Production outfit who are consistently featured in the DJ Mag Top 100 and are officially Egypt’s biggest music export!  Bringing some Irish flavour to the floor we welcome back special guest John O’Callaghan whose high-energy sound coupled with highly refined precision mixing style has seen him surge up through the DJ ranks. Other acts include master craftsman Simon Patterson, famed for 15 consecutive #1’s on Beatport, and whose production skills have retained his absolute credibility in both the underground as well as the overground, plus performances from Liam Wilson and Rob Harnetty

Every major city around the world has that one guy, who’s always on top of the freshest sounds and most cutting edge records. Enter Michiel Thomassen, professionally known as Mike Mago, who as label head honcho of Amsterdam-based BMKLTSCH RCRDS has been curating what’s hot and what’s not from Dutch soil and beyond for several years now, Mike will be making his Cream debut in the Annexe along with DJ/Production duo Redondo whose tech house sound has been smashing global dance floors and is set to smash the Annexe for this highly anticipated performance. Cream residents Anthony Probyn, Andy Mac and Jemmy complete the line up. Tickets are expected to sell out, advance tickets on sale now!