Defected In The House at The Albert Hall 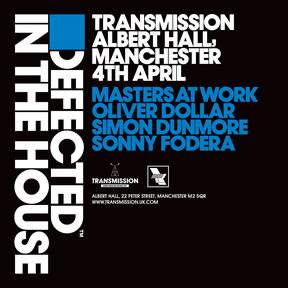 Defected In The House at The Albert Hall

On Saturday 04 April, Defected In The House heads to Manchester for The Warehouse Project offshoot series Transmission, where the iconic Masters At Work will perform a very special headline set.

Transmission is a new series of events kicking off in Manchester in 2015, with The Warehouse Project, Trof, Drop the Mustard, Metropolis, Chibuku and more coming together to host four months of parties at one of the city’s most unique venues.

Taking place at Manchester’s iconic Albert Hall, this will be the first time the US house duo have performed in the UK since playing twice in two days for Defected last summer: at London’s Ministry of Sound and then again at a mesmerising Boiler Room session hosted by The Edition Hotel.

Supporting these bastions of house are Oliver Dollar – whose track ‘Pushing On’ was recently revealed as the most downloaded track on Beatport in 2014 – along with Defected’s founder Simon Dunmore and key resident Sonny Fodera.