CURIOUS is back on March 9 in Paris! 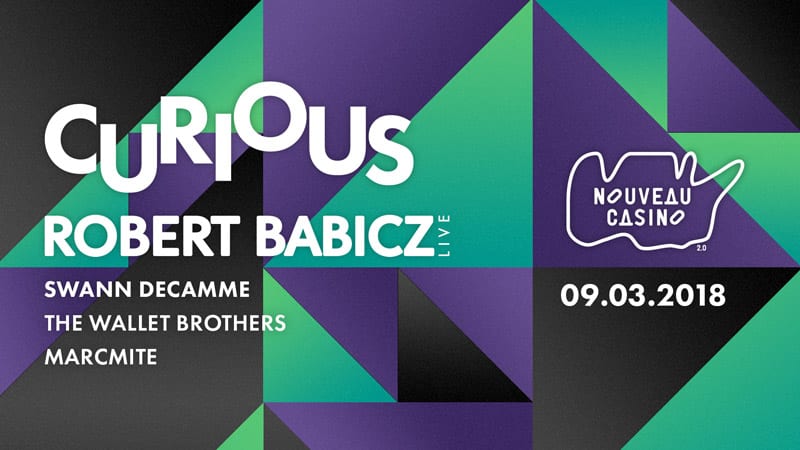 CURIOUS is back on March 9 in Paris!

After the success of the first edition, acclaimed by hundreds of curious clubbers on February 2, CURIOUS is back on March 9 at the Nouveau Casino in Paris. For this second session, there will be surprises and a line-up mixing renown and emerging artists: the Polish giant Robert Babicz, Swann Decamme, founder of Curiosity Music, the Caribbean Wallet Brothers and the Londoner by adoption Marcmite.

The second edition of CURIOUS, a new party concept crafted by the Paris-based collective Curiosity Music, in partnership with Dirtytrax and Lost On You, is scheduled for Friday, March 9 at the Nouveau Casino in Paris.

On this occasion, CURIOUS will receive a unique artist: Robert Babicz. Involved in the electronic scene since the early 90’s, this musician with an incredible talent has not stopped surprising and convincing music lovers around the globe. Synesthete, the Polish DJ and producer literally sees the sound and hears the images. Thus, he captures in his music the beauty and humanity of the world around him in order to connect his listeners to their deeper feelings with an incomparable technical mastery. After a 3-year absence in the French capital, this monument choses CURIOUS for his great comeback! A golden opportunity to (re)discover his melodious, atmospheric and always powerful sounds.

The public will also get together with Swann Decamme, DJ, producer and founder of Curiosity Music. He will honor his last Parisian gig before going on tour in Germany and the Caribbean. Rising value of the Parisian electronic scene, he recently shared line-ups with Stiv Hey, Gaiser, John Acquaviva, Alexi Delano or Marcus Henriksson, while his productions are now playlisted by legends such as Richie Hawtin, Stacey Pullen and Luciano. His next set should look groovier and more hypnotic, rhythmic and curious than ever!

Coming from St. Martin island, The Wallet Brothers will also be there! These two passionate globetrotters of music will warm up the bodies with their solar House. Regularly invited to the hippest clubs on the island, they also participated in the famous SXM Festival, a world-class gathering for Techno and Electro lovers.

Finally, Marcmite, member of Dirtytrax Records, will complete this very original line-up in the capital. Now based in London, this DJ blessed by groove already played in the biggest clubs such as Fabric, Egg, Ministry of Sound or Turnmills. His sets usually oscillate between Deep House, Minimal and Techno, nourishing himself better than anyone else of his audience’s energy.

See you on Friday, March 9 at the Nouveau Casino! Music, decor and welcome quality, trademarks of Curiosity Music, are guaranteed. Be there!

Online ticketing is open on Shotgun and Resident Advisor