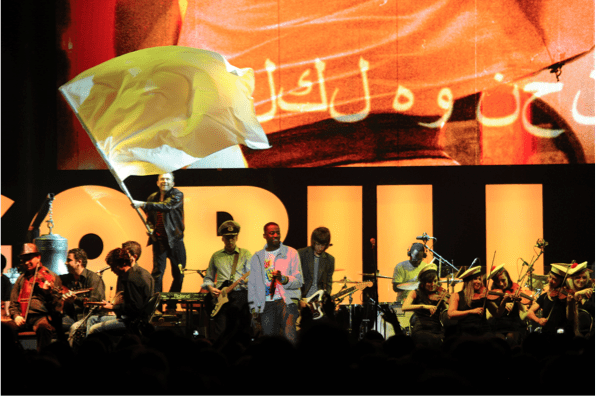 The opening of Roskilde Festival’s biggest stage is considered an esteemed task for most fans of the festival. A place for people to come together and celebrate the way music can inspire and unite people.

The Syrian National Orchestra for Arabic Music, led by conductor Issam Rafea, first played with songwriter and producer Damon Albarn at the Damascus Opera House in 2008. Albarn later worked with Rafea and the Orchestra when they appeared on the Gorillaz track ‘White Flag’. The Orchestra, together with Rafea, later joined Gorillaz on their 2010 ‘Escape to Plastic Beach’ World Tour, which also took them to Roskilde Festival.

As a result of the on-going conflict in Syria, many musicians in the country – including Issam Rafea and other members of the Orchestra – have been forced to leave the country. This special concert will see Orchestra musicians who previously worked with Albarn, travelling from both inside and outside Syria, to reunite for an orchestral performance alongside Albarn and other guest performers. The event will highlight and celebrate the remarkable music culture of Syria, providing a more positive perspective than events currently seen in the news.

Damon Albarn is no stranger to Roskilde Festival either, having played the festival for the first time in 1992 with Blur, he has since played a solo show, performed with Gorillaz and, not least, a 5-hour marathon set last year with Africa Express. This concert with The Syrian National Orchestra for Arabic Music will be his 8th time playing Roskilde Festival.

“This will be an extraordinary, fun, moving and unpredictable opening show. To open our Orange Stage with a Syrian national orchestra together with a large group of Western musicians is a way for us to show how music and culture can make people come together and overcome borders and conflicts.”

“Currently, several European countries have shut their borders, and many people view refugees as a burden. Through music we’re trying to show how people can be regarded as resources and offer something to the new communities they are now part of. Additionally, it’s very important for us to show and highlight the proud Syrian cultural history that is currently being demolished by the country’s civil war.”

The Orange Stage concert will be on Wednesday 29 June 2016. The concert is presented by Africa Express.

With today’s announcement of Syrian National Orchestra for Arabic Music with Damon Albarn and Guests, Roskilde Festival has now announced 54 of a total of 175 acts for the 2016 edition of the Danish festival. These acts include LCD Soundsystem, New Order, PJ Harvey, MØ, Red Hot Chili Peppers, Tenacious and Wiz Khalifa. Many more will be announced soon.