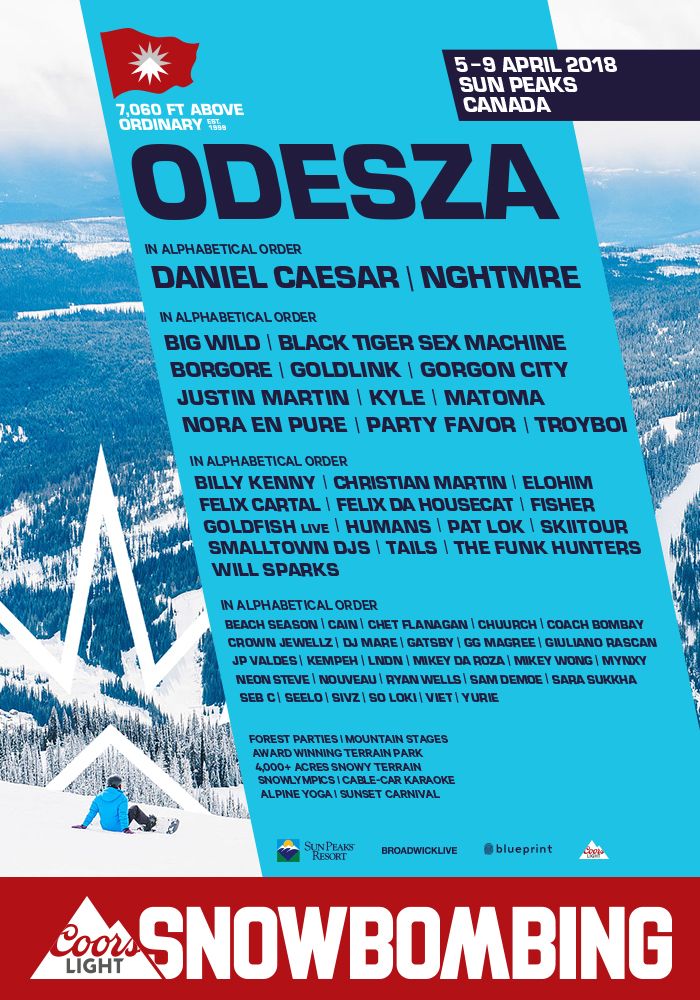 Snowbombing Canada regrets to announce, due to circumstances beyond our control, Cardi B has cancelled her appearance at Snowbombing Canada 2018, but are also delighted to announce that Daniel Caesar and NGHTMRE have confirmed as replacement headliners for the second edition of The World’s Greatest Show on Snow this April 5th-9th.

The much hyped, double Grammy nominated Daniel Caesar will be bringing his soul drenched, R&B coated sound to the mountains for the very first time, for a one-off, very special sunset set amongst the pine of Sun Peaks. At 22 years of age he has become one of the most talked about talents in music. His debut album, Freudian, released in August 2017, secured him two Grammy nominations: best R&B album (alongside Bruno Mars, SZA and Kehlani) and best R&B performance for album single “Get You” featuring Colombian-American singerKali Uchis, which peaked at No. 11 on Billboard’s Hot R&B Songs chart. His live show has been described as “swooning, magical, beguiling… Rapturous.” (The Independent). With a mountain backdrop on a stage flanked by a pine tree forest, it’s looking like the perfect setting for Daniel Caesar’s stunning sound.

Snowbombing Canada is also delighted to welcome NGHTMRE, the Las Vegas based electronic dance music superstar who is rapidly building a fevered fanbase of hardcore ravers. Known for sets packed with ridiculous high energy levels, monstrous basslines and multiple hands in the air moments, his rise to the top has been a dream to say the least. Some would say he arrived the day Skrillex made his ID the only unknown record in his 2015 Ultra set, a record that would go on to be arguably the biggest Trap song that summer. After playing his first headline gigs the week after, Tyler went on to hit almost every major festival in North America, including Lollapalooza, EDC Las Vegas, TomorrowWorld, Snow Globe, Freak Night, OMFG NYE, Moonrise, Contact Music Festival, and LifeInColor Festival. Now a seasoned global act and a bonafide arena star, NGHTMRE’s energetic live show will be a stunning spectacle at CLSBC18.

It’s no exaggeration to say that the Snowbombing experience is like no other. Whether you’re coming with your best friends, your significant other or braving it on your own, you’re sure to make new pals, discover amazing parties and the signature Snowbombing atmosphere.. Where else will you catch the world’s finest artists on the slopes or participate in alpine yoga before partying in an enchanted forest? 4 days and 4 nights of unparalleled partying? Book here!

Snowbombing provides the chance to party in and experience unique environments including the Forest Stage, The Underground, Chairlift Speed-Dating, Alpine Yoga, Coors Light Bascecamp, Ride & Seek, an award-winning Snow Park and The Snolympics.  Guests can enjoy renowned mountain-side restaurants, live life as a real Snow'baller with our VIP packages or see the incredible sights of Sun Peaks from the stunning mountain top venue The Sundance Terrace. And what about the hotels and condos? From 4* spa luxury hotels with jacuzzis, chalets and apartments in the heart of central Sun Peaks to pocket friendly self catered apartments and cheaper options in the surrounding area, Snowbombing Canada has the perfect pillow to suit everyone, no matter on wallet size…You can definitely snowbomb on a budget!

Serious skiers and beginner boarders alike are all encouraged to hit the slopes with 4,270 acres of uncrowded piste and the 55° gradients of the infamous Headwalls on hand for those feeling adventurous, plus lessons and plenty of beginner-friendly slopes to get to grips with for first timers. Black runs, blue runs, beer runs – there’s something for all abilities on Sun Peak’s powdery peak district. Snowbombing has truly redefined winter sports holidays and shown what the ultimate alpine music festival looks and sounds like.

With prices to suit all on accommodation options and just over three weeks to go, first timers and returning ravers alike can get in on the action early and beat the rush whilst getting an amazing deal. Four nights’ accommodation plus a festival wristband starts at only $589.

Book your place at www.snowbombingcanada.com