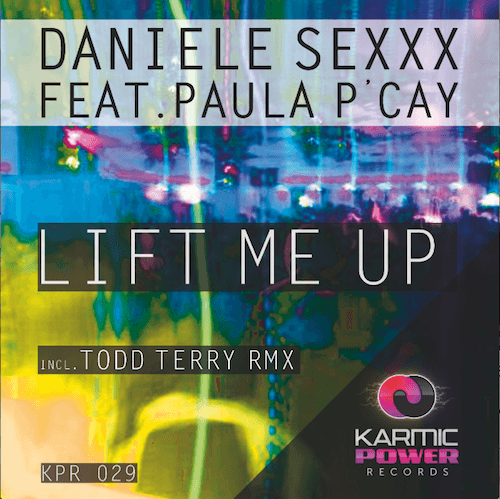 Making his debut on Lenny Fontana’s Karmic Power Records is the celebrated Italian house producer Daniele Sexxx with ‘Lift Me Up’, featuring vocals from Paula P`Cay. ‘Lift Me Up’ is a rocking electronic groove that’s packed with energy for the dance floor and armed with Paula’s mighty ‘POWAH’ vocal. Todd Terry delivers a fierce funk fuelled remix, taking it next level with his Intense breakdowns and beat science and label boss Lenny Fontanta rounds off this dynamite package, housing the party with an upbeat old school flavoured bomb!

Italian Producer/DJ Daniele Sexxx studied contralto saxophone in 1988. He later formed the group Prova Zero and performed in many clubs and festivals, later signing to Milanese label Do It Yourself of Molella and Moroldo. In 1998 Sexxx made the single ‘Funky And Fun’ for an advertisement for Special K. The single became the title theme of a music festival and Prova Zero went on to play live in Napoli, Roma, Milano, Torino and more. In 1999, to mark the hundredth year celebrations of A.C. Milan, a CD was produced with Sexxx performing a remake of the team¹s anthem ‘Milan, Milan’ with Toni Renis and Massimo Guantini which lead to numerous TV appearances. Since then Sexxx has gone on to make various productions and collaborations from House to Hip Hop, working with Beker, Toni Renis, Blu-bop, Cheryl Porter and has release his own productions and remixes on labels such as Wally’s Groove, Triballoide Records, Pride Records and Officina Sonora. For Spiller’s Nano Records he released ‘Mawkish’, which was a big hit and supported by Pete Tong. Sexxx is now producing for Lenny Fontana’s label, Karmic Power and also continues to produce Hip Hop, currently working with Darren Sains and rapper ILL Soul from NYC.

Singer / Songwriter Paula P`Cay was born in Romania as a niece of the most famous traditional singer Elena Roizen. Later moving to Germany, she joined a special music school aged only 5 and ten years later she specialised in songwriting, Jazz & Soul vocals and classic guitar. Paula has recorded over 200 songs with many international House Music producers and has made over over 400 international live performances around the world. Her diva-like stage presence fused with her strong and soulful voice fits fabulously with Dance, House, Electronic and Soul beats. Her biggest success was the Love Parade Anthem in 1999 ‘Music Is The Key’, with Dr Motte and Westbam which she performed live in front of 1.5 million people, along with the Christopher Street Parade Anthem 2002 ‘Free Your Mind’ with Dj Divinity, where she performed live in front of 800.00!

Karmic Power Records is a new label founded by veteran New York City House DJ Lenny Fontana and A&R man Manuel Genzel. Karmic aims to push the boundaries of House music once again, taking it back to an era when music had the ability to evoke passion on the dance floor and well beyondŠ  ³Our main focus will be to develop new acts and guide them along to grow as artists,² says Lenny Fontana. With releases from established acts like ATFC, Richard Grey, Funkerman, My Digital Enemy, DJ PP, and Marshall Jefferson, through to new releases on the way from upcoming talent such as Daniele Sexxx, James Bratch, Happyharry, Soulfin and Slap Jack, Karmic are already making a lot of waves!