Danny Howard Presents his ‘Off The Beaten Track’ Tour 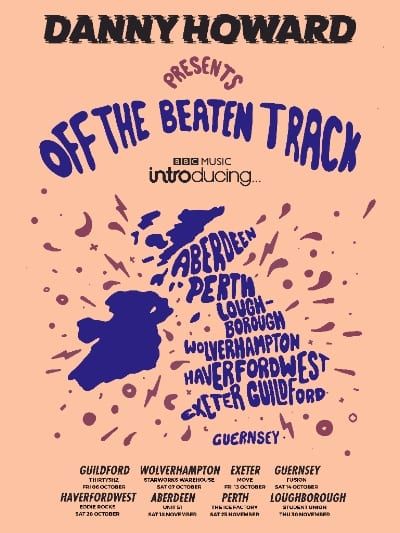 Danny Howard Presents his ‘Off The Beaten Track’ Tour

In partnership with BBC Music Introducing, Danny will be offering the chance for a local DJ to warm-up for him on his ‘Off The Beaten Track’ tour

Revered DJ, producer, radio host and label owner Danny Howard is launching a new string to his prolificbow this October with his Off The Beaten Track Tour, giving up and coming DJ’s a chance to follow in his footsteps. Danny will be offering an opportunity for local talent through BBC Music Introducing to perform at each of the venues during the eight-date tour providing a platform to showcase their undiscovered skills.

Reflecting how Danny won a talent search and landed his prize role on BBC Radio 1 – the ‘Off The Beaten Track’ tour will give him a chance to find show-stopping talent in places that would never usually be visited on a headline tour…in some of the UK’s finest hidden treasures.

These dates will follow on from the huge Nothing Else Matters stage takeover at the prestigious SW4festival in London as well as hosting his own room at Bristol’s In:Motion series.

Continuing 2017’s steady successful trajectory, the announcement of his Off The Beaten Track tour follows the release of two monstrous EPs. A year of firsts, Danny made his debut on Food Music with ‘Work That/Holla’ and Toolroom with his forthcoming ‘Extra Trippy’ EP. A dance music advocate, the illustrious producer has been focusing his efforts on building upon his impressive discography having previously been handpicked to craft remixes for the likes of Erick Morillo and Jax Jones. At the beginning of the year, Danny embarked on his ‘OneonOne’ tour to some of the UK’s best underground clubs with guests including Detlef, Secondcity, Prok & Fitch, and Fono.

Now in the midst of his relentless summer schedule, Danny will be taking the global festival circuit by storm with key dates at Sziget Festival, V Festival, Creamfields and Boardmasters – having already ticked Tomorrowland, EDC Las Vegas and Hideout Croatia off his list. Marking one his biggest seasons on the white isle with his annual BBC Radio 1 takeover, Danny will also be playing at Hï Ibiza, Pacha,  Amnesia as well as turning out for legendary UK house music brand Defected.

Danny’s mighty Nothing Else Matters label has played host to some the biggest dance anthems whilst at the same time releasing more underground focused tracks from artists such as Solardo, MANT, Rhythm Masters and Alexis Raphael amongst others with the Fire Beats compilations.

2017 has proven that Danny’s tastemaker status continues to solidify and with this forthcoming tour hehopes to discover even more fresh talent to see out the year.