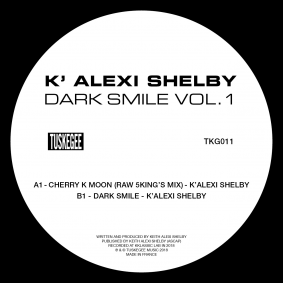 K-Alexi is a genuine Chicago great. He’s been at the core of the scene since the eighties and releasing his raw grooves on DJ International, Trax and Transmat, as well as his own K Klassik label. He has recently remixed for Seth Troxler’s other label, Say It Play It, but is now back serving up the sort of engaging originals that have made him such an enduring star.

Excellent opener ‘Cherry K Moon’ is a raw slice of deep and soulful tech. The driving bassline melts your mind as afro percussion and driving drums make for a solid groove below. It’s one for the late-night hours that will twist and turn any crowd inside out. The superb ‘Dark Smile’ is less tense and more house oriented in nature, with preacher style vocals up top and busy kicks down low. Live, chattery hand claps bring an organic feel and synth stabs inject looseness that will get hands in the air.

These are all innovate tracks that explore various different moods and grooves with a real sense of quality.