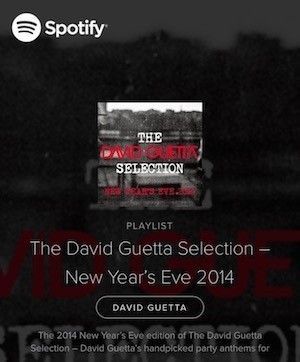 David Guetta curated a special New Year’s Eve playlist for Spotify to celebrate another landmark year in 2014. Comprised of three hours of music – incorporating a mix of classic tracks, as well as the best from the past year and a number of cuts from new album “Listen” – and available to stream from December 30th until January 2nd, “The David Guetta Selection” for New Year’s Eve serves as the perfect soundtrack to welcome in 2015. David is one of the most streamed artists on Spotify and this is his gift to all the followers. LISTEN, PARTY, HAPPY NEW YEAR!!

On a more poignant and compassionate note, David has also selected John Lennon’s “Imagine” at the 60-minute mark of his playlist – designed to be started at 11pm on New Year’s Eve – in order to guarantee it’ll be the first track to be played in 2015, feeding into to the charity work David undertook for UNICEF throughout 2014. #IMAGINE is a world-wide campaign launching on NYE using the timeless song to unite people across the planet with a message of peace and unity. People can simply download the Touchcast App for free and join the worlds biggest sing-along, inserting themselves into a video with artists and influencers from Katy Perry, will.i.am, Neymar to UN Secretary General Ban Ki-moon. Each song shared unlocks $1 to support UNICEF’s global work for children (bit.ly/imagine). #EVERYVOICECOUNTS