Italian mainstay Davide Squillace makes his debut on Rebellion this September with Drive Good. Teaming up with UK regular Nolan, the single features French talent Jaw on vocals and US stalwart Rick Wade as remixer.

Nolan spoke about how the release came together, describing how: “Davide and I haven’t actually met in person, but we’ve created a few monster tracks together. He sent a few projects to me when I was in Brighton and I ripped out the rawest sounds to start turning them into tracks. We decided Drive Good was ready for some top line vocals from Jaw, who took the track to a whole other level.”

DJ and producer Davide Squillace has achieved a lot in his career as resident of the famed Circoloco and part of the supergroup Better Lost Than Stupid with Matthias Tanzmann and Martin Buttrich. He is also expanding on his production repertoire with releases on the likes of Cadenza, Kaoz Theory, No19, Moon Harbour and Hot Creations. Straddling house, disco, breaks and prog with a unique twist and an eye for the underground, Nolan is making serious waves with key releases on Mobilee, LNOE, Bedrock, Circus, Kittball, MadTech, Crew Love, Get Physical, OFF, Gruuv & Connaisseur Recordings.

French singer-songwriter Jaw is a prolific vocalist in electronic music, making regular appearances on Set About, BluFin and many more besides. Michigan-favourite Rick Wade has been a leading figure in Detroit house for decades, having been active as a producer since 1994. His music has found a welcome home on Shall Not Fade and Open Sound in recent times, a testament to his keen-ear for production. 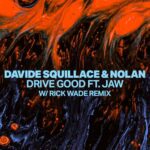