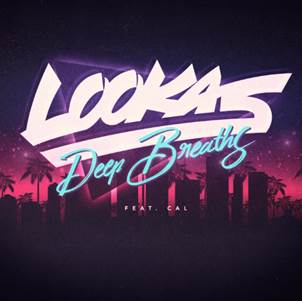 In the last year, Lookas released his highly anticipated Lucid EP on the Monstercat label, touting collaborations with the likes of Krewella and showing his fans the versatility of his production style. Lookas is now kicking off the new year with a sunny collaboration with Cal, one half of the Los Angeles-based pop duo Timeflies. The track is a fusion of electronic beats and pop, making it a versatile jam for drives down the freeway, beach-side hangs, and sweaty dancefloors. In the three minute track, Lookas’s Miami influence can be heard in the funky horn twangs and bouncing drum beats that adorn the choruses. Cal’s vocals call for the listener to take a second, smell the roses with one deep breath, and to lose the stress as the rhythm takes hold.

“Man.. me and Lookas caught a vibe on this record. We knew immediately we wanted to center everything around the idea of exhaling your problems away. And just taking a deep breath, letting it all out and have these horns tell you everything you need to know.” – Cal (of Timeflies)

“This record was a blast to work on. This was the second time working with cal and the record came together super quick! We are stoked for everyone to bump this one.” – Lookas

Since his breakout remix of “Tsunami” was commissioned by Ministry of Sound and released as an official mix in 2014, Lookas’s music has commanded the attention of listeners. This has led to his production of the multi-platinum-selling single “GDFR” for Flo Rida and Sage the Gemini. After gaining traction with his popular original track “Apollo” and a noteworthy collaboration with Crankdat on “Game Over”, he became the producer for Krewella’s “Be There” and released a powerhouse EP, Lucid on Monstercat.

Timeflies, aka Cal and Rob, developed their own spotlight back in 2011 by sharing covers and original music through their YouTube channel. It all began when Cal freestyled over Rob’s beatboxing upon meeting at a party in 2007. Since then, they’ve amassed over 500 million views and 261 million Spotify streams globally, played massive festivals like Lollapalooza, and have had their music remixed by the likes of Fedde Le Grand. With the production prowess of Lookas and the crooning vocals of Cal, they’ve conjured up a track that’s sure to heat up sets everywhere.