Defected In The House NYE 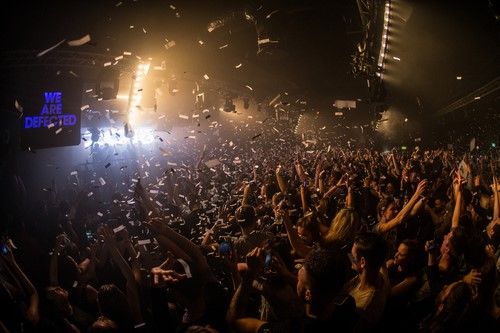 Defected In The House NYE

This New Year’s Eve, Defected In The House wraps up the year by bringing some of the world’s finest DJs to Ministry of Sound for one the strongest house music line-ups you’re likely to find.

2015 has seen a huge number of incredible Defected In The House parties, not least of all in Ibiza where the renowned house champions hosted Amnesia’s legendary – and vast – Terrace, when tens of thousands of clubbers descended over the course of the season to get their weekly house fix. Elsewhere, Defected took over stages at acclaimed festivals including We Are FSTVL, Extrema and Sundown, drawing capacity crowds and turning heads with every show.

The New Year’s Eve show at Ministry of Sound is the first and only Defected In The House party of 2015, and promises to be well worth the wait.

Andrea Oliver and Purple Disco Machine have both had stand-out years. Oliva’s ANTS residency in Ibiza has made him one of the most in-demand DJs around, while Purple Disco Machine has established himself as arguably the hottest house producer of the year, with a slew of stunning records including the recent Traxsource No.1 ‘L.O.V.E.’ alongside Borig Dlugosch.

Out in force for the final fling of 2015, the Defected residents Sonny Fodera, Sam Divine, Copyright, Franky Rizardo and Simon Dunmore continue to raise the bar when it comes to delivering house sets of staggering quality, and will all be bringing their A-game to Ministry of Sound on the night.

Finally, The Loft hosts the For The Love Of House DJs where Greg Sawyer and Simon Dawson who will be spinning classic house all night long, paying homage to the records that have helped define the scene over the past 30+ years.

Complete with four rooms of music, including the legendary main room, The Box, plus state of the art sound and lights across the venue, Ministry of Sound is a world-class space with 23 years of definitive New Year’s Eve events for thousands of like-minded clubbers.

The party concludes Defected’s 2015 This Is Our House Club Tour that commenced back in March at London’s Oval Space. The tour took in dozens of clubs and festival spaces across Europe and Asia, including Amnesia (Ibiza), Extrema Festival (Holland) Barrakud Festival (Croatia), Shakedown Festival, (Brighton) Sundown Festival (Norwich), We Are FSTVL + We Are WHSE (London), EH1 Festival (Edinburgh), Great Suffolk Street (London), Dickens World (Kent), the Amsterdam Dance Event (ADE) showcase at AIR and a multidate tour of the Middle East and East Asia.