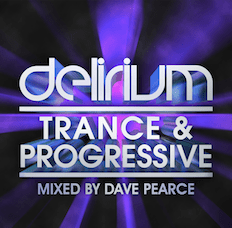 The new album kicks off on a progressive vibe with tunes like the phenomenal Ilan Bluestone remix of Above & Beyond ‘On a good D’ay’ alongside the hypnotic melodies of progressive rising star Farius with his Mixmag ‘Tune of the month’ – ‘Sweet Deception.’

Leaders of the progressive scene including Andrew Bayer, Protoculture, Max Freegrant and Johnny Yono continue the journey as the speed gradually powers up to 138BPM with tunes from Cosmic Gate, Ferry Corsten and hot UK talent Dan Thompson along the way and ends with trance bangers including Dave Pearce’s own track ‘Savannah’.

This year sees Dave return to Ibiza playing Es Paradis alongside Alex Morph and others and club and festival appearances including Trance Sanctuary at The Egg and Ministry of Sound in London.

As the genre continues its resurgence in the clubs and festivals of the world Delirium trance & progressive is the perfect album for those with a thirst for the latest uplifting tracks.

Delirium Trance & Progressive will be available to stream + download from iTunes from 7th July.

Dave Pearce launched Kiss 100, the UK’s first legal dance radio in 1990 before taking his record box to the BBC in 1995 and creating the iconic Radio 1’s Dance Anthems show.  Today he continues to DJ and produce and while also running his Delirium Record label and radio show.