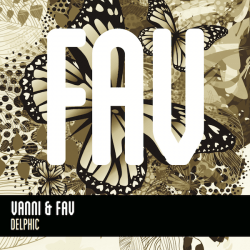 After having done the 'Do Do Do' with their last single, Vanni & Fav reveal their next adventure in synthtopia with the profoundly melodic Tech fused 'Delphic' on Favouritizm.

Intricate, beautiful and riddled with emotion, 'Delphic' is centred around a dynamically dominant bass hook that organically circles around the track, united with other octaves to create a diverse array of intensity. The first of 2 tension filled breakdowns introduces a shimmering synth hook that bursts into a tapestry of pretty harmonies as it jumps back into the groove .The second makes way for the arrival of a climax building set of gut wrenching emotional strings, before exploding back into a mighty finale where all melodies dance together…

Vanni & Fav are Favouritizm's upcoming boy/girl duo comprising of Italian producer Alex Vanni and UK DJ/producer Sarah Favouritizm. The pair have already received the thumbs up from Claptone, Booka Shade, Shir Khan, Aki Bergen & Richter, Audiowhores, Martin Ikin, DJ Meme, Brian Tappert, among others, with their quirky style which fuses pre-House 80's electronica with contemporary House and Techno. Both sharing a love for vintage analogue sounds and sexy electronica, 2014 saw Alex & Sarah team up on productions including their debut single 'Stretch And Flex', their Spring 2015 smash, 'Are You Dancing?' and the melodic Tech groove, 'Do Do Do' which featured Sarah's vocals. Their remix projects include Irena ‘Stuck In Love’ and 'Toot Toot' by Timmy Vegas,