DESERTSCENE TO CURATE THE ROADHOUSE STAGE AT BLACK DEER FESTIVAL 2019 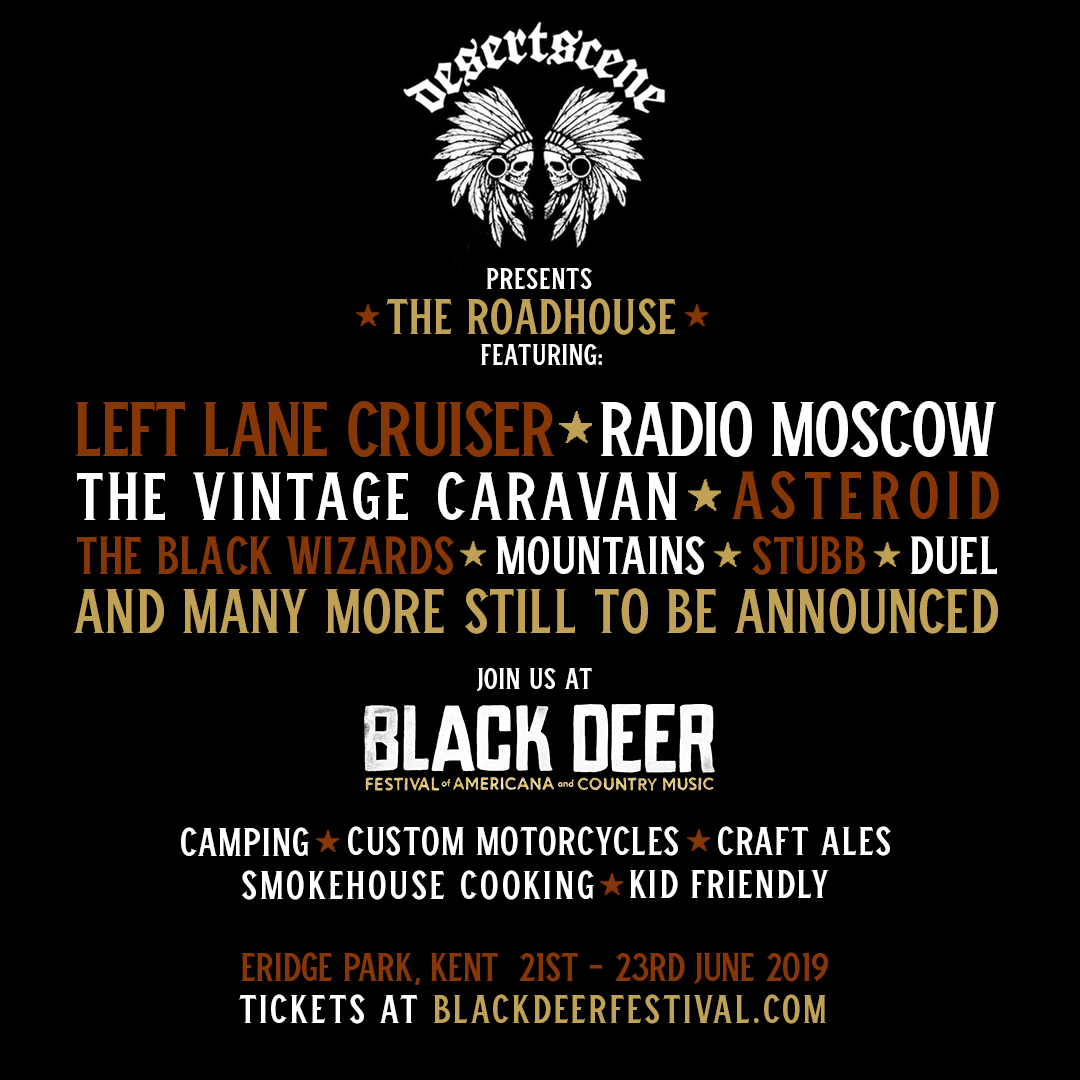 DESERTSCENE TO CURATE THE ROADHOUSE STAGE AT BLACK DEER FESTIVAL 2019

Fresh after announcing its first names last week, Black Deer has announced that the legendaryDesertscene will be curating The Roadhouse stage at this year's festival, with the first names revealed today.

Talking through the announcement, Desertscene said…

"Americana runs through our blood, even if it may be on the louder side of the spectrum, Desertscene has always been a celebration of the unique sound that was originally born out of the Palm Desert in California. Those undeniable low desert tones have taken a universal leap over the last 20 years; with a vast, progressive and unstoppable influence that has not only created a staggering array of musical talent, but an underground culture that few other genres could fathom.

It was a no-brainer “YES!” when Black Deer asked us to curate The Roadhouse for 2019, the core values shared between Desertscene and Black Deer are without question. There’s no doubt we have a bounty of heavy cross-over blues, psych and rock’n'roll to showcase, but it’s the support of underground cultures and the appreciation of story telling that makes us align so seamlessly.

So with that, Desertscene are beyond excited to reveal the first 8 acts for next years Roadhouse. Please welcome from the sprawling plains of the USA, whiskey-fuelled, foot-stompin' blues rock’n’rollers LEFT LANE CRUISER and renowned hard-rock psych power trio RADIO MOSCOW, Icelandic riff-lovers THE VINTAGE CARAVAN, otherworldly masters of the jam ASTEROID, fuzzy proto-rockers THE BLACK WIZARDS, 70s doom worship in the form of DUEL, London’s own psychedelic stalwarts STUBB and the howling sound of MOUNTAINS.
We’ve got a bunch more killer bands, custom bikes and some notorious after-show shenanigans all still to be announced, but for now we hope you’ll find something new to enjoy as we bring a whirlwind of the desert to the deer park. Stay tuned!”

Black Deer celebrates a culture like no other and is more than just a music festival.  It’s more than an appreciation of a musical genre. Black Deer is a celebration of a way of life.  A way of life rooted in, and respectful of, the rich cultural heritage of America – a movement that’s become known as ‘Americana’.

Black Deer has been widely acclaimed as a truly authentic experience, an independent festival born from passion, and built from experience – thanks to its two female founders whose love and respect for the genre shines through every facet of the festival. 2019's festival will be headlined by the legendary Band of Horses, who will be joined by a stellar lineup of the best Americana and Country acts the scene has to offer, including John Butler Trio, Jade Bird, The Dead South, Larkin Poe and many more.

TICKET INFORMATION
Tier 1 tickets on sale now and are available from https://blackdeerfestival.com/tickets/