DGTL Barcelona announces the complete lineup for August 11 and 12 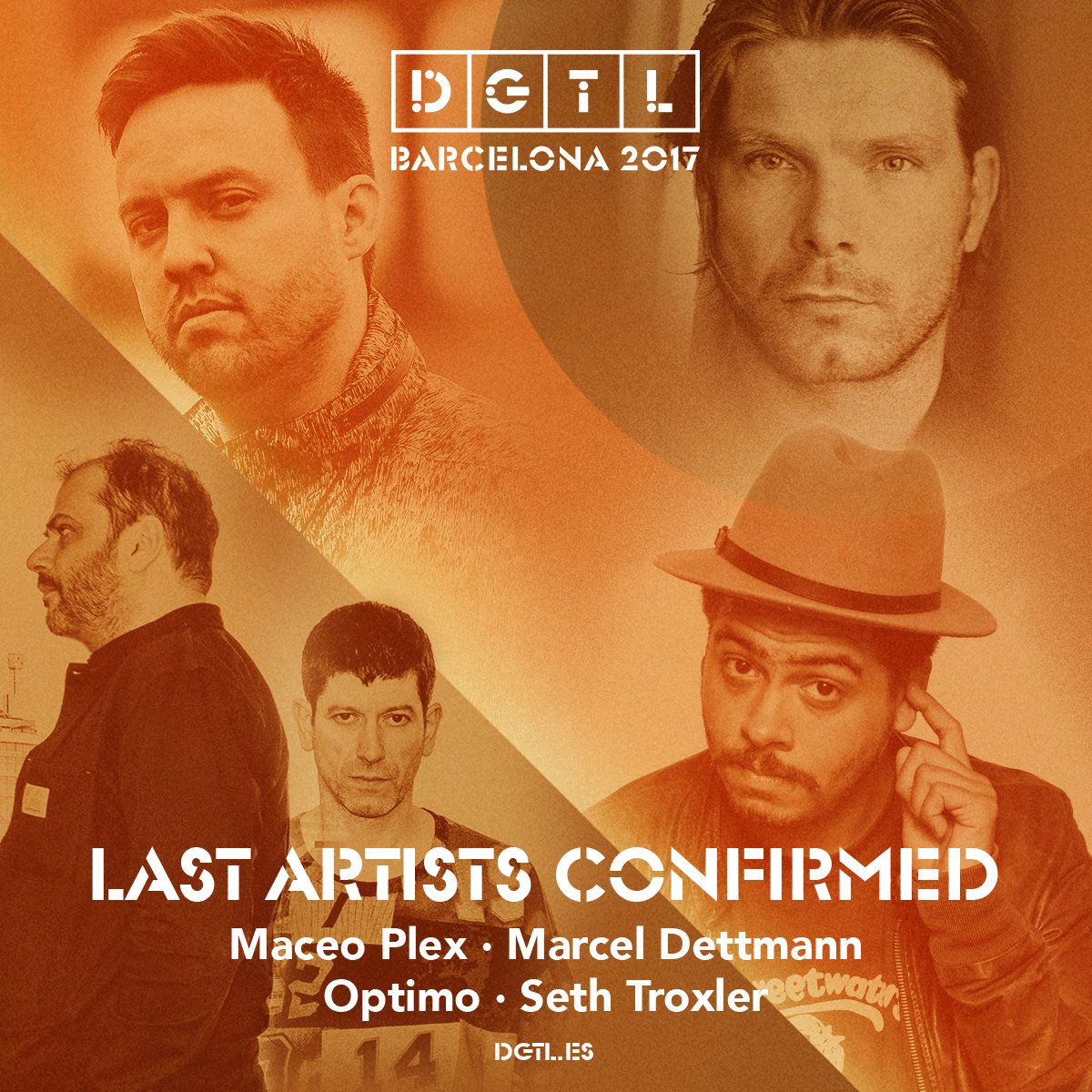 DGTL Barcelona announces the complete lineup for August 11 and 12

Maceo Plex, Marcel Dettmann, Optimo and Seth Troxler, who will perform an unusual b2b with Paco Osuna, round out a stellar bill featuring over 50 artists for the 2017 edition

With less than two months to go, DGTL Barcelona’s third edition announces the last names to join the bill next August 11 and 12. Maceo Plex, Marcel Dettmann, Optimo and Seth Troxler, who will perform a b2b with Paco Osuna, will share stages with already released headliners Âme, Adriatique,Daniel Avery, Derrick May, DVS1, Eats Everything, Jackmaster, Jeff Mills, Joy Orbison, Kölsch b2b Michael Mayer, Mano Le Tough, Mind Against, Paco Osuna, Recodite [live], Solomun and Tale of Us, among many others.

On one hand, the renowned Maceo Plex, whose career is made on monumental hits of dark house and overflowing bass lines, will perform on the Modular stage on Saturday 12 atnight. The Ellum boss and the visible head of the Mosaic parties will prove once again why he is one of the leading figures of the most visceral and moody electronic music. On the other hand, DJ and producer Marcel Dettmann will perform on Friday 11 at the Generator to honor his reputation as one of the standard bearers of the Berghain’s contemporary techno.

Nevertheless, one of the most anticipated announcements for this third edition is Seth Troxler b2b Paco Osuna. Growing up, the ancestral roots of the Michigan born soon became delicate dance cuts, which he will play againstPaco Osuna in a duel that promises to shake the foundations of the AMP stage on August 12. Optimo will heat the Frequency stage on Friday 11. The duo, formed by JD Twitch and JG Wilkes, is famous for their memorable sets that show a unique indifference to musical genres and restrictions.

Passe-partout tickets are sold out

The third edition of DGTL Barcelona will take place at the Parc del Fòrum the on August 11 and 12. The first and second editions had 20,000 and 30,000 visitors over each weekend. As for 2017, ticket sales are moving fast: passe-partout tickets, which include the entrance to the festival, the afterparties and the Sunday event, are sold out. 2 day pass tickets and those including the Sunday event are now on a second release, too.

Just like in previous editions, DGTL Art will bring its industrial atmosphere to the port and the sustainability program DGTL Revolution will aim to create a waste-free festival. More details will soon be announced.

Passe Partout SOLD OUT
Afterparties Friday and Saturday SOLD OUT