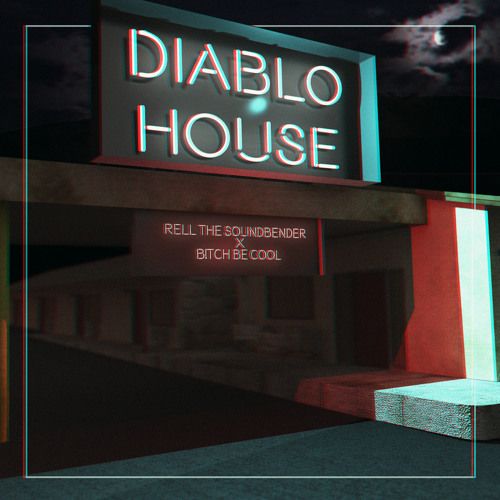 If horror movies, haunted houses and a good scare are your idea of a good time, look no further than trap dynamo Rell the Soundbender's new track "Diablo House" to satisfy your creepy fix. Just in time for Halloween, "Diablo House" has a distinctly sinister ethos, featuring ominous drums, stabbing laser synths and even a vocal sampling of a woman's bloodcurdling scream as the finishing touch. Rell teamed up with future and g-house duo B!tch Be Cool for "Diablo House." Whether for a Halloween party or getting jacked up in the gym, Rell the Soundbenderhas you covered with this one. "Diablo House was a concept I had written a few months ago, and the sound just kind of had that creepy Halloween feel – which also happens to be my favorite time of the year," says Rell of the new track. "I played it for Richard one day in the car and the rest is history. We started to recraft it and brought it home. It's a fun tune for the Halloween season. I hope you guys dig it!" Rell the Soundbender's new EP, "Diablo," which features "Diablo House" and more original tracks, comes out on November 10th. Both the track and EP are released on Insomniac Records, the world-renowned brand behind Electric Daisy Carnival (EDC) by dance music mogul Pasquale Rotella. Insomniac's brand has expanded from festivals to record labels and beyond – it is a destination for all genres of electronic music and is continuously evolving as the scene grows and changes.

Rell the Soundbender earned his name from is passion for blending unexpected, unique sounds and genres of music. The Panamanian DJ and producer draws his influences from a myriad of music – one will recognize everything from hip-hop to moombahton to trap and house in his productions. Rell's ability to fuse sounds that don't typically blend together has made his sound unreplicable and incredibly dynamic. His trap hits "Grimy Thirsty" and "Angels X Demons" have made many rounds on Diplo's BBC Radio 1Xtra mixes, and he has produced official remixes for Bro Safari's "Scumbag" and Snoop Lion's "Lighters Up," which was the official remix for Snoop's iconic Reincarnated album. Rell earned the attention of Skrillex and later released his first EP "Gambozoo" on his Nest HQ imprint. His live performances are notorious for slaying the dance floor and festival stages as he makes appearances everywhere from EDC Las Vegas and Mexico, Escape Psycho Circus, Miami Music Week and Storm Festival in Shanghai. See what other soundbending tracks Rell has up his sleeve on his new EP "Diablo."

Founded in 2014, Insomniac Records explores the best new sounds in dance music while curating a diverse catalogue of quality releases in all electronic genres. More than just a label, Insomniac Records is a destination where fans of all styles can discover and enjoy top tracks from a roster that includes world renowned artists and producers. Pasquale Rotella, Founder and CEO of Insomniac, has modeled the label’s trajectory to fit the ever-changing needs of the industry. As it was built to initially focus on long-term projects and collaborations, Rotella has introduced signing one-track deals with artists as well as releasing master compilations. In June 2016, the label released it’s very first compilation titled, "Insomniac Records Presents: EDC Las Vegas 2016," which featured tracks from notable names across the dance music spectrum. Insomniac Records continues to build its audience by releasing multiple exceptional tracks every month, hosting curated stages at major music festivals and assembling an unparalleled lineup of talent breaking ground in the scene.