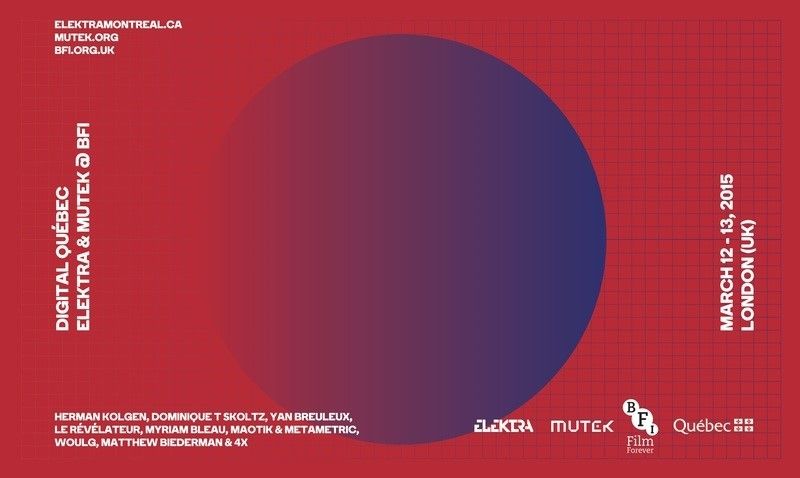 Dubbed Digital Québec, some of the province’s most innovative and experimental A/V creators will be presenting their work for the very first time on British soil. Acting as a continuation of the combined ELEKTRA and MUTEK 15th anniversary event EM15 presented in Montréal in May 2014, the selection of works represents the interdisciplinary intersection of music, sound and digital art where both organisations meet.

Here is the confirmed lineup:

7pm
Dominique t Skoltz: y2o
Known for her filmic explorations into the contrasts between the intimate and clinical, Dominique t Skoltz presents her new work which studies the subject of troubled love with stunning results (29 min).
Yan Breuleux: Tempêtes
Yan Breuleux’s work for this show is inspired by the late work of painter Joseph Mallord William Turner. Presented as a journey through a series of chaotic panoramas undergoing continuous transformations, Tempêtes is created in collaboration with cellist Soizic Lebrat (20 min).

7pm
Maotik & Metametric: Omnis
Omnis is a live A/V performance by Maotik & Metametric which takes its inspiration from the concept of ubiquity. Expect a sonic and visual assault that destabilises the senses as the piece explores the limits of space and technology (30 min).
Woulg: Ring Buffer
Montréal-based composer and new media artist Greg Debicki presents Ring Buffer, an A/V performance which explores data-bending by using visual sculpturing software and transforming generated 3D shapes into sound (40 min).

Bold installation and screen works mingle with spectacular, live audiovisual performances to showcase a range of practices that underline Québec’s artistic and technological strengths in these areas.

Also integrated into the program will be the International Marketplace for Digital Arts (IMDA), which is open to the public and free to attend. Taking place on the afternoon of Friday March 13 from 12.30pm – 5.30pm, Québec artists and organizations will demonstrate their artistic practice and related activities to the public and to an audience of selected European professionals. The aim is to encourage the circulation of artworks and to stimulate collaborations and co-productions.