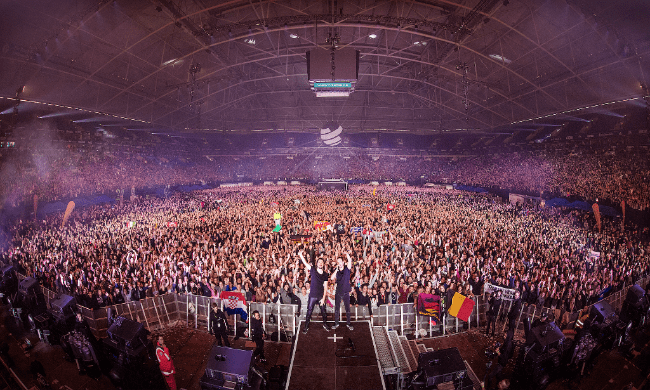 As industry heavyweights that have not only changed the landscape of modern electronic music but are also assured as two of the most prominent faces of the scene in a generation, Dimitri Vegas & Like Mike continue to smash every record in the book.  Following their colossal 2015 area snow ‘Bringing The Madness 3.0’, the current #2 DJ’s in the world decided to raise the bar in 2016 and attempt to break the record for the biggest solo show by a DJ in Germany. In what was a ferociously sought-after event, the pair succeeded in their goal of obliterating the previously-set record as 45,000 ardent fans joined them at the Veltins Arena (home to FC Schalke 04 Football club) for the ‘Bringing Germany The Madness’ extravagance, which was of truly epic proportion!

In partnership with Tomorrowland and World Club Dome winter edition, the show sold over 30,000 tickets in under 24 hours when they first went on sale. Shortly after the event’s capacity sold out which demonstrated the tremendous pulling power that a Dimitri Vegas & Like Mike show has amongst their European fan base. Performing the biggest solo show Germany has ever seen to a record-breaking 45,000 people crowd not only re-wrote the history books but was also one of the highest of an incredible year for the Belgian brothers.

Continuing to play to sold-out arenas alongside performing mainstage sets to jam-packed festival crowds worldwide, the duo has also maintained an ever busy schedule of music releases too. From singles with Ne-Yo (Higher Place) and Steve Aoki (‘Melody’) to their most current release ‘Hey Baby’ with Diplo, which has already amassed in excess of 5 million Spotify streams in under 2 two weeks, there appears to be no limits to their stratospheric achievements.

Preparing to follow in the triumphant success of their ‘Bringing Germany The Madness’ show, Dimitri Vegas & Like Mike’s focus is now on their annual end-of-year-spectacle. Spread across 4 dates and housed at the Sportpaleis Antwerp, this year’s homecoming show will see an incredible 120,000 fans join the brothers for arguably the biggest and most insane party of the year. After selling a phenomenal 60,000 tickets in a mind-boggling 60 minutes, it would be fair to say that Dimitri Vegas & Like Mike will well and truly be ‘Bringing the Madness’ once again this December.