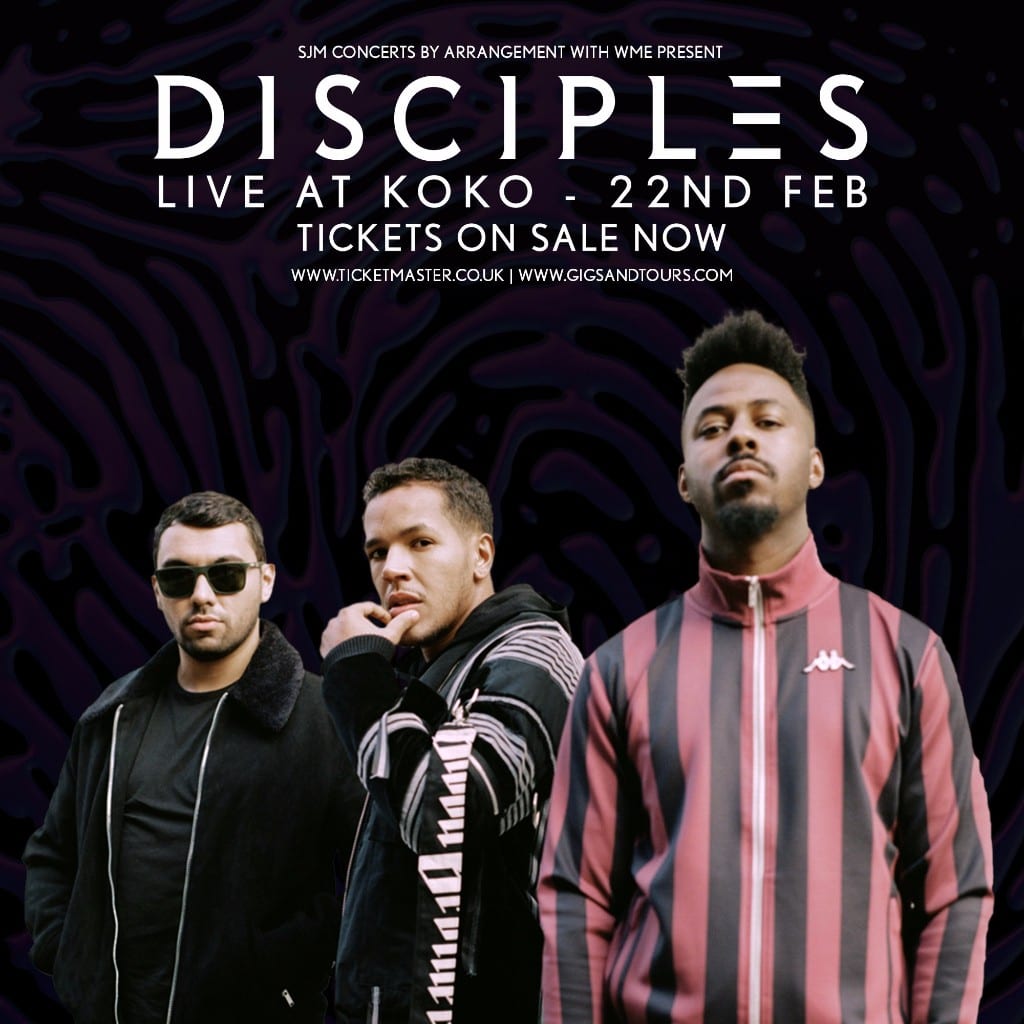 Fresh off the back of releasing their new single ‘Jealousy’, London-based trio Disciples have announced the details of their debut live show. Headlining London’s famous KOKO venue on Thursday 22nd February 2018, the guys will step away from the decks and perform their dancefloor hits with a live band.

Along with this announcement, the guys have also revealed the official music video for ‘Jealousy’. Exploring the track title’s theme and lyrics, the compelling visual stars Disciples’ Nathan Duvall, Luke Mac and Gavin Kool – following each of their scenarios as they obsess over their elusive female companion and her behaviour.

Since launching ‘Jealousy’ two weeks ago, the track is already on over 1 million streams across all DSPs, has been added to the Kiss Fresh Playlist and was chosen for BBCR1’s ‘Track Of The Week’, as well as Danny Howard’s ‘Future Anthem’.

Making an impressionistic Live Lounge debut in May, with Duvall delivering a strong vocal performance of ‘On My Mind’, the guys were approached soon after to perform at Radio 1 in Ibiza. Not stopping there, Pete Tong then handpicked them to launch his Live Dance Music Month at Maida Vale this month, with the guys executing a special live rendition of ‘Jealousy’. This quick succession of showcases over the last few months has led the trio to debut their new live setup to their fans at KOKO early next year.

Disciples’ upcoming live performance at KOKO will be their biggest headline show to date. Since selling out London’s XOYO last year for their debut UK tour, the guys have shown immense development in their sound. With their very own Nathan Duvall as the lead singer on their past two releases, he will be leading the live band at the show next February with his impressive range and distinctive vocals.

Having successfully thrown sold out events at Ministry Of Sound and Electric Brixton for their party series ‘The Following’ over the past year, the platinum-selling hitmakers also hosted their own boat party at Hideout, an igloo party at Snowbombing, as well as their own stage at SW4 over the summer.

With ‘Jealousy’ set to follow the path of their recent success with the Gold-certified single ‘On My Mind’, Disciples have established themselves as one of the UK’s most exciting crossover dance acts. With their recent announcement of their fresh live setup – their journey is one that continues to push boundaries.