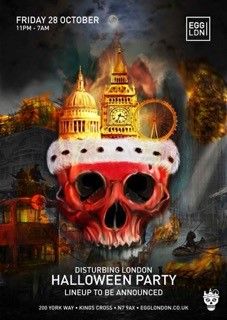 The South-Londoner has become a global star thanks to chart-topping hits including 'Pass Out', 'Written in the Stars' and 'Not Letting Go', as well as three hugely successful albums and numerous awards.

Launching his own Disturbing London label – covering both music and fashion – in 2007, this summer it took on a second six date ‘Disturbing Ibiza’ residency at Ushuaia, with Tinie joined by an entourage of like-minded performers and DJs. Taking over Egg London for the first time, and transforming the venue into a Halloween grotto where dressing up is highly encouraged, he brings a similarly high ranking list of friends.

Having shared vocal billing with Tinie on last year's No.1 hit 'Turn the Music Louder (Rumble)' by KDA, Rinse FM favourite Katy B is joined by DJ Emerald. Also familiar with Tinie Tempah fans is tour DJ DJ Charlesy, whose Capital Xtra show every Saturday evening takes in everything from hip-hop, R&B and bashment to Afrobeats, house and UK funky.

Following on from the success of debut Armada Deep single ‘Kaleidoscope’, Kiss FM’s Charlie Hedges takes it off the air and into the clubs following her debut #CharlieSays UK tour. Sammy Porter's remix of Tinie Tempah's 'Not Letting Go' helped spread his bassline house sound and he's joined by ;Hot Line Bling’ remixer James Hype and Rinse star Sam Supplier, who is also behind the hot new DVR label.

With Disturbing London’s All About She channelling a modern garage sound, as heard on their debut ‘Go Slow EP, plus MindStep boss Crises and LoveJuice’s Michael Green & Bongo Ben completing the line-up, expect musical mayhem fitting to the Halloween theme.