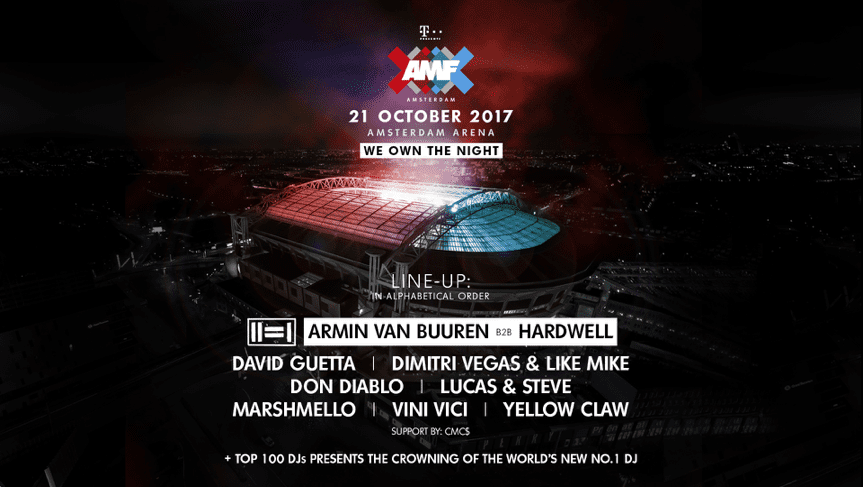 Sizing up to be one of the most exciting events in the dance music calendar, the crowning of 2017’s world’s No. 1 DJ will return to familiar grounds to celebrate the finest talent in electronic dance music for the fifth consecutive year at AMF. The highly anticipated fifth edition will not only see the crowning of 2017’s world’s No.1 DJ, but also the DJs who will collect highly sought-after awards such as Highest Duo and Highest Trance DJ. In addition AMF will also showcase an array of the biggest and best names on the scene, including a never seen before back-to-back performance by The Netherland’s very own Armin van Buuren and Hardwell during the #TwoIsOne showcase. Other artists bringing their sounds to the arena will include David Guetta, Dimitri Vegas & Like Mike, Marshmello, Don Diablo and many more.

Becoming the globe’s biggest music poll over the past 24 years, the DJ Mag Top 100 amasses over 1 million annual votes, and has positioned itself as the ultimate guide to the world’s best DJs. Previous worlds No.1 DJs include Martin Garrix, Armin van Buuren, Hardwell, Dimitri Vegas & Like Mike, Tiësto and Carl Cox. This year’s poll is now closed, and results are in, making AMF the most in-demand and thrilling event for dance music lovers all across the planet.

UNICEF, the global children’s organization, has been announced as the Top 100 DJs charity beneficiary for 2017. UNICEF works in over 190 countries around the world to keep all children healthy, happy and safe. They ensure more of the world’s children are vaccinated, educated and protected than any other organisation. The suggested minimum donation when purchasing tickets is €5.

For tickets to AMF 2017, head over to amf-festival.com