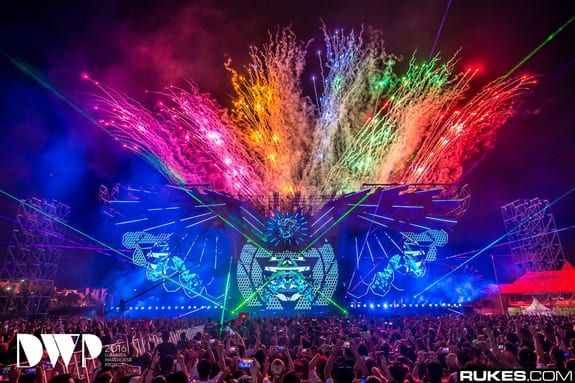 Over two days in December, 90,000 music fans – 27,000 of whom were from overseas – descended on Jakarta’s JExpo Centre to celebrate life, culture and the beats that unite them under the masterful wizardry of Carl Cox, Martin Garrix, Hardwell, Zedd, W&W, DJ Snake, GTA, Hot Since 82 and more.

That was, until Yves V took to the main stage… to the sound of complete and utter silence…

Fortunately it wasn’t the fault of the sound technicians, or an adverse reaction to the talented Belgian. Incredibly, over 40,000 festival-goers stood absolutely stock still as Djakarta Warehouse Project 2016 put a cap on the year’s biggest trend by producing the largest ‘Mannequin Challenge’ in Asia.

No mean feat shutting that many people up, Yves V and the Ismaya Live crew managed it for precisely 19 seconds before the massive crowd erupted to the sounds of Rae Sremmurd’s ‘Black Beatles’ ft. Gucci Mane. Unsurprisingly the video is already causing mass tag-hysteria on Facebook, as those who were there check to see if they made the final cut.

The DWP16 Mannequin Challenge isn’t the only video from the event doing the international viral rounds. On Saturday night, the dance floor sank to their knees as DJ Snake dropped ‘Get Low’. For Nicolas Anggono, it presented the perfect opportunity to pop the question to his girlfriend Jeane Angkow. The moment, which was captured for posterity by a friend, has now passed the 1million+ views milestone on DWP’s official Instagram account:

For event organizers Ismaya Live, the heartwarming act – in the midst of people from over 40 different countries from around the world – was the icing on the cake for the philosophy and ethics of the Djakarta Warehouse Project. Christian Rijanto, the man behind Ismaya Live’s multitude projects and events, explained further:

“Seeing flags from around the world lifted up high around the festival embodies the spirit of 'Bhinneka Tunggal Ika' or 'Unity in Diversity' that our nation, Indonesia, embraces. Whether it’s two people, or the tens of thousands, we all come together to unite.”

With DWP, the jewel in the Ismaya Live crown, set to return for 2017 even bigger, Ismaya Live continue to assert their unparalleled dominance over the South East Asian festival scene.

For more information on DWP, go to www.djakartawarehouse.com.