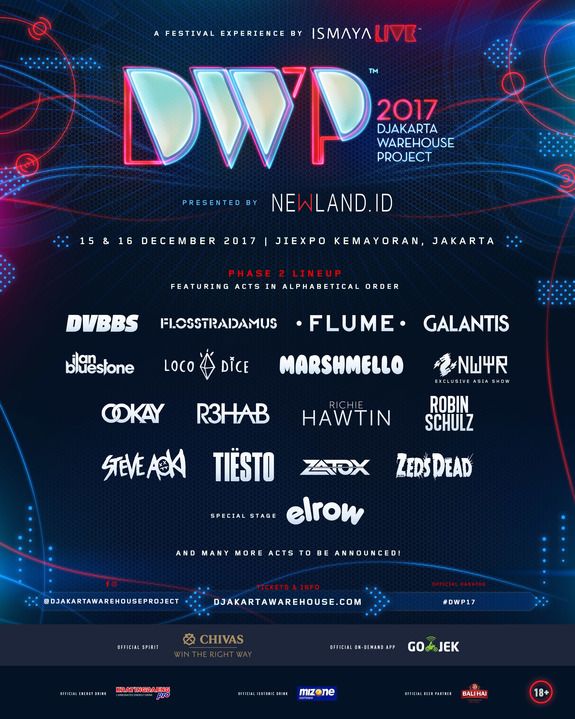 Since its inception in 2008, the Djakarta Warehouse Project has grown into one of Asia’s largest, most eclectic dance music festivals, welcoming a record-breaking 90,000 visitors to its two-day event in 2016. With preparations well underway for the landmark tenth edition, taking place at Indonesia’s JiExpo Kemayoran on December 15 & 16, 2017, the diverse array of Phase Two artists and guest stages is now confirmed.

In a huge move from D.W.P organizers, Spanish super-promoters Elrow will be hosting a stage in Asia for the very first time. Known the world over for their extravagant, over-the-top productions helmed by some of the biggest names in house and techno, this ‘festival within a festival’ is not one to be missed. Stay tuned to D.W.P’s social channels below for Elrow lineup information over the coming weeks.

Adding to the list of acts from Phase One (DVBBS, Flume, Galantis, Marshmello, NWYR, R3HAB & Tiesto) is an extraordinary set of artists spanning the worlds of hip-hop, trap, techno, deep house, big room and everything in between.

For fans of the underground, two of techno’s most undisputed legends, Loco Dice and Richie Hawtin, will be heading to D.W.P to display their distinctive brands of four-to-the-floor. M_nus label boss Richie Hawtin has become one of the world’s leading proponents of minimal techno over the past two decades, while Tunisian-born Loco Dice has become famed for incorporating elements of hip-hop into his distinctive, driving sets.

Grammy award-winner Robin Schulz’s idiosyncratic guitar riffs will be filling Indonesia’s capital city with a deeper soundscape and Ookay will look to showcase his fusion of contemporary house, dub and trap, while Ilan Bluestoneand Zatox will present more progressive performances.

For all further details, and ticket information please visit www.djakartawarehouse.com