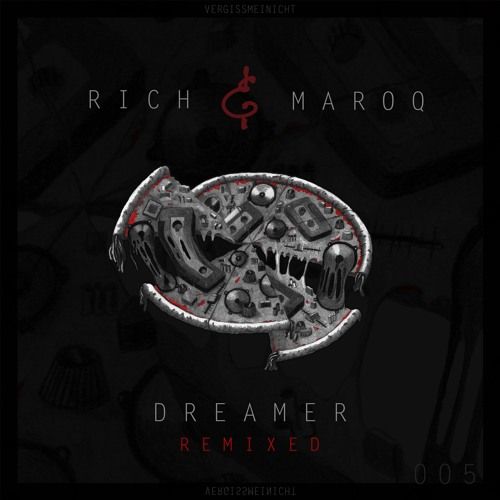 Sometimes the most unlikely combinations yield captivating results, and Rich & Maroq appear to be a case in point. The founders of the Vergissmeinnicht collective have been companions on a musical trip since 2008: the methodical, determined Scotsman Richard Elcox and the flamboyant Peruvian Jorge Marroquin.

At the end of last year the duo made waves for the first time as a producer team, presenting their debut EP – Dreamer – a stand-out release of exceptional quality that demonstrated to the media, DJs and the broader scene that their skills are not limited to memorable DJ sets, they can also produce remarkable results in the studio.

Now Rich & Maroq are following up with Dreamer Remixed, inviting us to discover new sides to their musical production.

Rich & Maroq have performed at clubs and festivals such as the legendary Bar25 (B), Secret Island Festival (SE), Hive (CH), Kater Holzig (B), Sisyphos (B), Wilde Renate (B), VMN-Lima (PE) and Kater Blau (B). They also started the first Vergissmeinnicht club nights and open airs.

Performing in different venues in their home base of Berlin, Munich, Zurich, Hamburg and also further afield in countries such as Peru, Sweden and Poland, they have played alongside some of the biggest acts in today's scene, sharing the stage with acts from Ian Pooley and Troy Pearce to Alex Niggemann, M.in, their current studio partner Jens Bond and many more…

Rich & Maroq steered clear of many social media channels for a long period and have largely remained under the radar. With their debut release the pair finally put themselves on the map. Music media outlets such as Mixmag Germany, Fazemag, TRNDMUSIK and Sceen.fm have reported on the duo. à Press Coverage

With the Dreamer EP (feat. Ron Flatter Remix) Rich & Maroq appeared for the first time as a producer team. However, Richard Elcox is certainly no stranger to the production game. In 2012 Richard contributed to the Secret Island Nation Festival Compilation (Darek Recordings) with the track “Archipelago”, a collaboration with Dirty Room, as part of a line-up including Ian Pooley, Demir and others. The track was well received by the scene and the media alike, and was even named the “best track” on the compilation by FazeMag. In early 2015 Richard Elcox released his solo debut – Spooked EP (Vergissmeinnicht) – inviting the listener to become lost in their own cerebral cinema with tightly woven grooves, crisp percussive structures and abstract melodies.

Now Rich & Maroq are following up with the remixes of Dreamer, and they have their friends Soukie & Windish and Markus Kenel, highly regarded artists in the scene, on board for the remixes. The release of the Dreamer – Remixed EP on Vergissmeinnicht will be celebrated on 18 February 2016.

The EP was mastered by Katermukke Mastermind Sascha Cawa at his studio in Berlin. The hand-illustrated artwork was created by the artist Jo Kraus. All graphic design work was contributed by Bella Stone.

The Dreamer Remixed EP by Rich & Maroq, Soukie & Windish and Markus Kenel will be released digitally on Vergissmeinnicht on 18 February 2016.