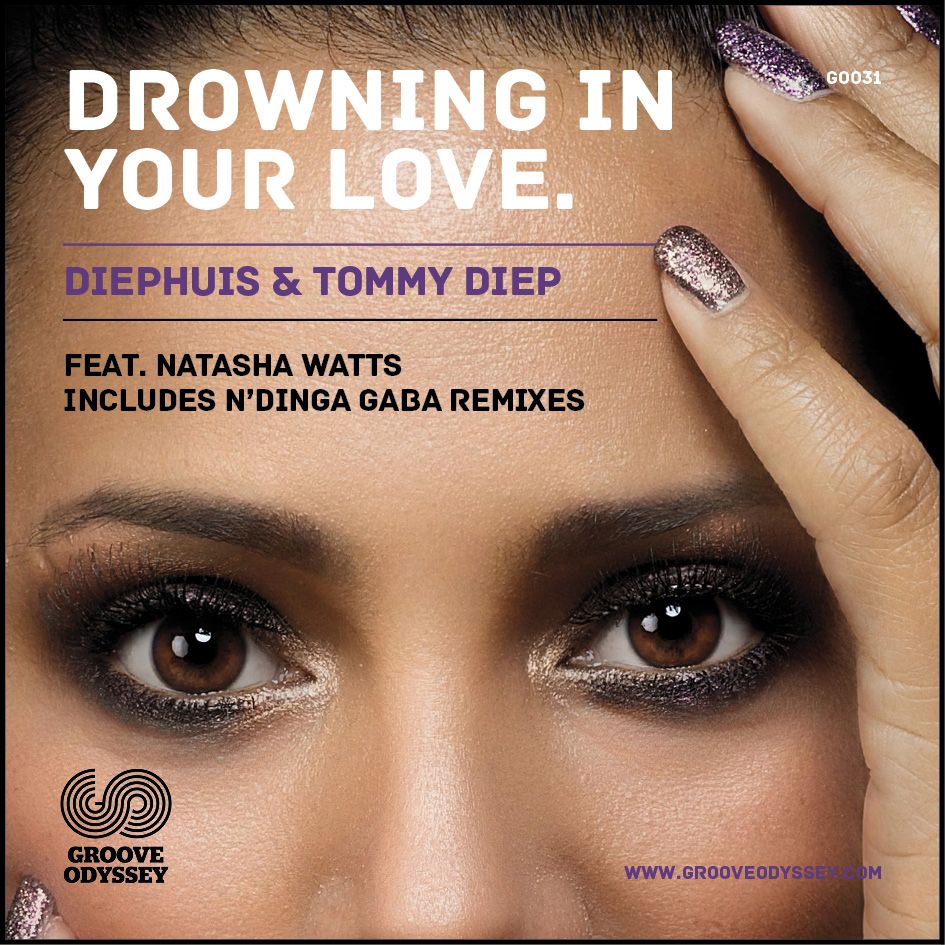 Groove Odyssey turns up the heat on its steamy new release ‘Drowning (In Your Love)’ from Diephuis & Tommy Diep featuring Natasha Watts with a superb soulful Remix from N’dinga Gaba from Global Diplomacy Productions. Raw n’ raunchy, this one kicks.

In its original mixes ‘Drowning (In Your Love)’ from Diephuis & Tommy Diep is a raw n’ driving dark deep house jam laced with Natasha Watts’ x-rated spoken vocals. Their Dub is pure bangin’ dancefloor ammo, pushing the groove to the max with its swing-hard marching drums.

N’dinga Gaba’s Remix opens with sweetly soulful keys and pads, spiced up by the steamy spoken vocal hitting the groove…’going down, going down’. There’s also an N-Dinga Remixstrumental.

As a DJ Diephuis has played alongside International DJs/Producers such as Kerri Chandler, Kenny Dope (MAW), Dennis Ferrer and DJ Spinna.

Baltimore’s N’Dinga Gaba of Global Diplomacy Productions has produced for top labels such as, Foliage Records, Sole Channel Music, Offering Recordings and Code Red Recordings, and this Remix is going to notch up more accolades and plays.

Natasha Watts first blew up on the UK soul scene with ‘Show Me’ single after her first collaboration with Cool Million – featured on the Cool Million III album and followed up with the summer smash of 2012 ‘Back 2 U’ with producer Ric Atari (Soul Seed Vol 1 CD). In demand she has worked with Reel People & Papa Records, Yam Who?, Bugz In The Attic’s Kaidi Tathum, and has had releases on Freestyle Records, Purple and Nervous.

She has supported the legendary Betty Wright at the Blackpool Soul and Southport Weekenders and in 2013 was Nominated and Won by public vote, ‘Best New Soul Act’ by Soul Survivors magazine.

Groove Odyssey is the label that grew out of London’s biggest soulful house club, who host parties at Ministry Of Sound, 51st State & Ceremony Festivals, Fire, Pacha etc. With a top notch cast of DJ/Producers such as Louie Vega, Kenny Dope, Fanatix and Artists such as Gerideau, Sara Devine, Dajae, Dawn Tallman already dropping releases on the label, Groove Odyssey continue to fly the flag for house music in the UK.

‘Drowning (In Your Love)’ by Diephuis & Tommy Diep featuring Natasha Watts with a Remix by N’dinga Gaba is the steamy new release on Groove Odyssey Records out in October.