Due To Phenomenal Demand, 6th Stage Announced For Hospitality In The Park! 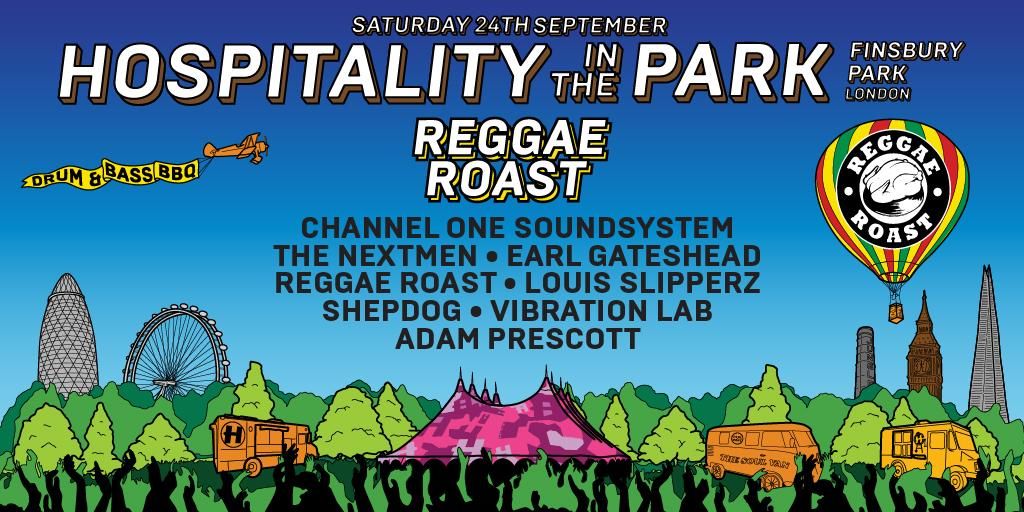 Due To Phenomenal Demand, 6th Stage Announced For Hospitality In The Park!

Boasting one of the biggest lineups of drum & bass greats of the past 20 years, Hospitality In The Park continues to grow and expand with the announcement today that due to phenomenal demand, there will be a 6th stage added for the event on 24th September.

There’s been a phenomenal response since Hospitality In The Park was announced with over 70% of tickets sold already, as drum and bass fans from around the world are booking into one of the defining events in the genres history. With over 60 acclaimed and revered names across those 5 already announced stages, the Reggae Roast Stage is set to bring even more bass to Hospitality In The Park.

One of the most vibrant monthly reggae nights in London, Reggae Roast, the host of this fantastic stage, bring their feel good music vibes to Finsbury Park promising an eclectic mix of roots, dub, reggae.

One of the most vibrant and acclaimed reggae nights in London, Reggae Roast are set to bring exactly that to the park, with the lineup lead by one of the world’s greatest and best know dub reggae sound systems, run by the legendary selector Mikey Dread – Channel One Soundsystem. Joining them is the underground electro beats of The Nextmen and Earl Gateshead, regarded as one of the true father figures of the UK roots and reggae scene. With further appearances from Louis Slipperz, DJ Shepdog, Vibration Lab and Adam Prescott, there’s only one destination at Hospitality In The Park that’ll be hosting the tropical sunshine vibes on 24th September, with the Reggae Roast Stage well and truly open for business.

The Reggae Roast stage joins an incredible lineup of stage partners for Hospitality In The Park, where alongside the Hospitality Main Stage you’ll see influential Belgian dub kings Rampage, Dub Phizix & Strategy, Soul In Motion x Med School and The Doctors Orders all hosting stellar lineups across the day, transforming Finsbury Park into a mecca of movers and groovers.

These acts join a packed lineup of some of the biggest names in bass and dance music including High Contrast, the newly formed London Elektricity Big Band, Calyx And Teebee, DJ Marky, Rene LaVice, Rockwell, Modestep, Tim Westwood and over 60 other names for a festival experience like no other.
Aside from the unparalleled array of musical beats, Hospitality In The Park will offer a truly 360 degree festival feel with tethered balloon rides in Hospital Records’ very own custom built hot air balloon, live graffiti and art installations, an array of London’s best independent street food and of course the one-of-a-kind, unbeatable Hospitality atmosphere.

A landmark moment for the genre, the city and 2016 – Hospitality In The Park is one not to be missed.

Third release tickets are on sale now: https://HospitalityInThePark.lnk.to/Tickets2016PR
For further information head over to: http://www.hospitalityinthepark.london/