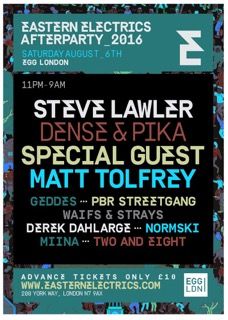 ‘Block-rocking and genre defying’, Eastern Electrics has established itself as one of the UK’s leading electronics music Festivals over the last four years soundtracked by the hottest names from the worlds of house, techno, garage, bass and disco, plus quite a bit in between. Uniting different tribes with its broad electronic musical outlook, head to Egg LDN for that unique festival experience carrying on past the sun rising.

VIVa’s Steve Lawler steps out from the summer rampage of his Warriors residency at Sankeys on Sundays to headline the Eastern Electrics After Party stirring up a melting pot of robust techno and house rhythms, shaken up with some acid house. A DJ’s DJ, Steve is set to floor the Main Room with a ‘Warrior’ style set full of Exclusive mixes and tried n’ tested summer grooves, both from his Viva label and beyond. From his recent Essential Mix in May – http://www.bbc.co.uk/programmes/b07c4xtg to his Night Life radio show, Steve Lawler continues to stretch things as far as they can do, always championing new sounds and artists.  released some of the industry’s most collectable mix series such as the ʻDark Drumsʼ, ʻLights Outʼ and, most recently, the ʻVIVaʼ series.

In April 2016 Steve was the subject of a new ‘warts n’ all’ dance music documentary, ‘The Art Of The DJ’ directed by Piers Sanderson (best-known for 2010's ‘High On Hope’, which charted the rise of acid house and rave culture in Britain). Starting in Birmingham, this 80-minute biopic looks at  the next chapter in dance music's journey, using Lawler's career to chart the transition from the underground to the mainstream. It takes in Lawler's earliest rave experiences, his successes in Ibiza and his subsequent problems with drugs and fame.

Currently on fire through their DJ sets with Drumcode at Sonar and at Paradise, DC10, Ibiza, Dense & Pika return to Egg LDN ready to detonate the Main Room with their blistering melodic house & techno arsenal. Their recent remix of ‘Planet E’ and the ‘Calf EP’ on Drumcode have been thundering out of speakers across the world’s finest clubs alongside their most used weapons in club land, ‘Tex’ and ‘Edging Forward’, and who could forget their Hotflush release, ‘Colt EP’ , a real turning point for the pair and an unmistakable, hand-raising piano roof raiser.

Leftroom founder Matt Tolfrey celebrated the 10 year anniversary of his label last year and is one of electronic music’s most passionate DJs. His varied selection, open mind and the ability to read as well as lead a crowd has seen him continue to be in huge demand whilst creating his own vision of where electronic music is heading. His Leftroom imprint celebrates over  50+ releases from artists as varied as Maceo Plex and Laura Jones to Jay Haze and DJ Bone and this infectious energy seeps into his DJ sets where he still remains the life of the centre, serving up hot tunes.

Bristol’s Waifs & Strays first appeared among the new wave of house-leaning producers in 2010 alongside friends like Eats Everything and Julio Bashmore, channelling Chicago grooves and bass-heavy sounds. Their definitive releases 'Yeah, Yeah' on Leftroom (named Essential New Tune by Pete Tong in 2011 and one of the year's biggest hits)  and the sultry 'Body Shiver' on Hot Creations, have seen them work with Kerri Chandler's Madtech label, Futureboogie, Luke Solomon’s Classic Records,  Viva, Resonance and they continue to impress on recent releases ‘Fire In Me EP’, ’Same Difference EP”  and their Remix of  Disintegrate’s ‘Party People’ on Skream’s  label Of Unsound Mind. Live they mix it up flowing effortlessly from Ableton live to the turntables and they definitely bring the party.

PBR Streetgang continue to raise their game with recent appearances in Japan, Rio De Janeiro, and Berlin’s Panorama Bar as well as launching new night Lost Property in Leeds in between a busy summer packed with Festival and Ibiza dates.

Crafting disco inspired house cuts to keep you dancing all night long, one of Leeds’ very finest, PBR provide the perfect soundtrack for a festival party having released productions on labels such as Hot Creations, 2020 Vision, Futureboogie, E.A.R, ISM and Wolf Music. Long term residents of the world renowned party We Love… at Space, PBR’s Tom and Bonar honed their craft at the legendary Leeds club, Asylum and their unique musical approach never fails to connect with the crowd, threading New York’s house music legacy to the Jacking underground beats of their Leeds roots.

DJ and producer, Geddes is one of the true pioneers of the house and techno scene in London, whose now legendary event series mulletover became an integral cog in the evolution of a thriving underground. With his Ibiza summer residency at Space's 'Kehakuma' night and debut at DC10S, and own Nofitstate series of events, Geddes continues to set the standard for quality. Crafting a tougher sharper sound of late and treading the line between house and techno, he’s released EPs on Leftroom, Adam Beyer’s Truesoul imprint and a rather impressive follow-up EP on Mobillee Records.

Sure to be a complete road block and sell-out again this year book your place at the Eastern Electrics After Party before they’re gone.