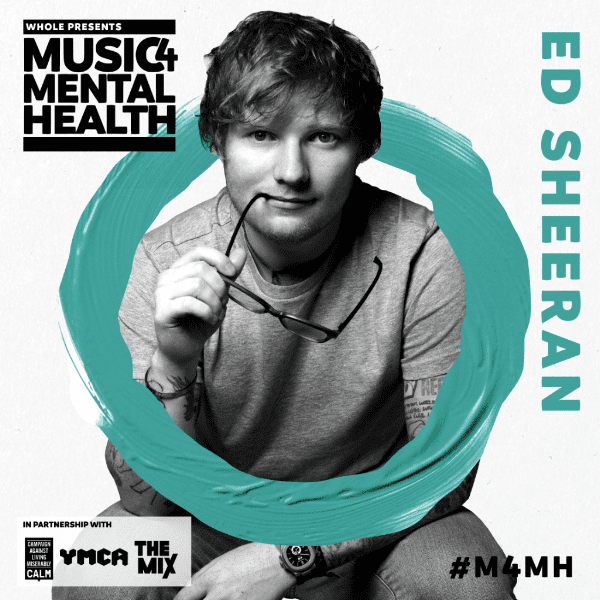 Tickets for the inaugural #WHOLE Presents Music 4 Mental Health will go ongeneral sale from 8am on Friday 7th September and are available via the official www.Roundhouse.org.uk venue site and WHOLE.org.uk site, where more information on the event can be found. In a staunch effort to combat touts, Music 4 Mental Health has appointed Twickets as the official resale partner for the event.

Opening the debut Music 4 Mental Health fundraising concert with a very special stripped back acoustic set is none other than Ed Sheeran – one of the world’s biggest and best-selling pop-stars of all time. A sofa-surfer turned megastar has seen global success, not only topping the charts but breaking them; last March the ‘Perfect’ and ‘Galway Girl’ singer had nine songs in the top 10 at the same time. A prominent previous supporter of the #IAMWHOLEcampaign and a figure who hasn’t been shy to vocalise his own journey with mental health, we are thrilled to have Ed kicking off proceedings with his stripped back set.

Ed Sheeran says;
"I’m so excited to be taking part in the first-ever Music 4 Mental Health event at the Roundhouse in November. Music is such an amazing way of taking the mental health conversation to a new level”

Also joining the bill alongside Ed Sheeran, Anne-Marie and Olly Murs on Sunday 18th November is pop phenomenon Ella Eyre. Described by the Evening Standard as a ‘Brit Beyonce’, the Brit school graduate was first catapulted to success as a guest vocalist on Rudimental’s No 1 track 'Waiting All Night', and since then has won over audiences around the world with her uptempo blend of galeforce and soulful vocals and high energy R&B vibes. Another figure who has been a strong advocate for mental health, Music 4 Mental Health looks forward to welcoming Ella to the Roundhouse stage.

Ella Eyre says;
“I’m really excited to be performing at the Music 4 Mental Health event in November. Music is such a powerful way to bring people together – it’s something we can all relate to and get involved with. I’m glad to be playing a part in raising awareness and support for the amazing charities working to end the stigma surrounding mental health.”

X Factor star James Arthur is also confirmed to play the showcase. After taking a step away from the limelight, the balladeer is back in full force following the success of his 2016 album 'Back From the Edge' which detailed his personal struggles with anxiety disorders. Having first cemented his popstar status with his BRIT nominated single “Impossible”, the record became the biggest selling X Factor single of all time. James returned in 2016 with his second number 1 single “Say You Won’t Go” and a renewed passion for tackling the stigma surrounding mental health through his music, which is whyMusic 4 Mental Health is thrilled James will lend his pitch perfect voice and ultra loyal fanbase to the worthy cause.

James Arthur says;
“Mental Health and the issues that surround it can only be tackled by people speaking out about it. The Music 4 Mental Health fundraiser showcases the commitment being made to bring mental health awareness to people’s attention and I’m proud to be a part of a cause that’s very personal to me”

An evening set to bring incredible individuals, influential communities and the most prolific names in British music together under one roof, Music 4 Mental Health is set to be unforgettable fundraising concert at London’s renowned Roundhouse on 18th November 2018.

Anne-Marie, Olly Murs, Ella Eyre, Ed Sheeran and James Arthur, with the evening compered by the inimitable Jordan Stephens, one half of Rizzle Kicks and #IAMWHOLE’s founding ambassador.

A monumental collaboration project, Music 4 Mental Health is proud to partner with the UK and Ireland’s leading youth and mental health charities; the Campaign Against Living Miserably (CALM), The Mix and YMCA.

Jordan Stephens says;
"Music is a language that everyone understands and has the power to unite people from all walks and thoughts of life. I can already feel the conversation opening up in regards to mental health so now it’s time to take action and really help people. With these great charities and the support of the music industry, we have a chance at doing something amazing."

Matt Campion, Creative Director of Whole / #IAMWHOLE says;
"If there was ever a sign that the needle is shifting towards more openness and honesty around mental health, then Music 4 Mental Health is it.

I’m beyond excited that Ed Sheeran, James Arthur and Ella Eyre are the latest to join our line up alongside Anne-Marie and Olly Murs. Let’s shift that needle some more! I AM WHOLE."

TICKET INFORMATION
Tickets to Music 4 Mental Health will be available from 8am from Friday 8th September via official Roundhouse.org.uk and via Whole.org.uk. Tickets will cost £85 (subject to booking fees).

Music 4 Mental Health is running a strict anti tout policy for this event – appointing Twickets as the official resale partner for this event.

Twickets is a fan-to-fan ticket resale marketplace where the price of tickets is never more than the original face value. Tickets can only be resold via this platform.

Buying or selling tickets on any other platform is strictly prohibited. Transfer of names on tickets is not allowed unless re-sold via Twickets, to ensure full transparency and fair access to tickets.