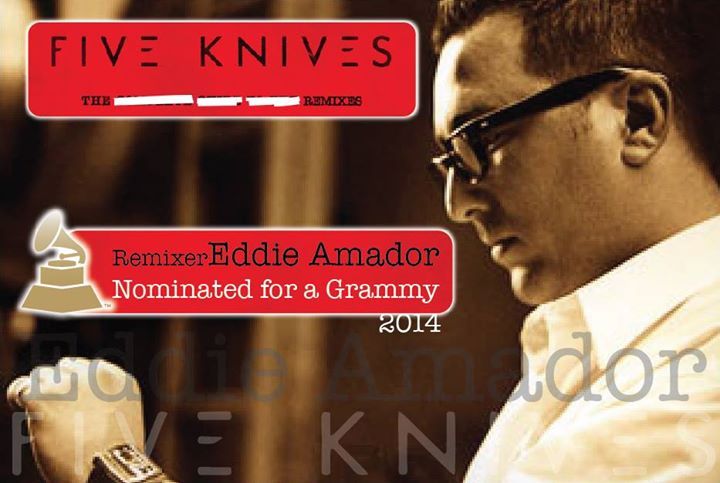 International house music Producer, DJ, and Remixer, Eddie Amador, has received a Grammy nomination for his remix of Five Knives ‘The Rising’ on Red Bull Records. He will be an official nominee at the 57th annual Grammy Awards on February 8th in LA. Amador also remixed ‘The Rising EP’ and Five Knives ‘Sugar’.

He will be competing in the Best Remixed Recording Non-Classical category with the full talent list including nominees such as Tiesto, MING, Audien, Kaskade, and Robin Schulz. Eddie is known for remixes of Madonna’s ‘Superstar’ single for Live Nation/Interscope, his remix projects for Leela James, Michael Buble, and Seal for Warner Brothers Records and Reprise.

His remix of ‘Rise’ catapulted into the Top 10 UK National Chart landing him a performance at the megaclub Ministry of Sound in London. He has also seen headlining spots at The Queen in Paris, Centrofly in New York, Crobar in Chicago and Miami, Stereo in Montreal, and Pacha and Space in Ibiza. He has also seen gigs in Australia, Germany, Latvia, Mexico, and The Netherlands.

Eddie Amador has been DJing for over 15 years and many would consider him a House Music prophet. He has become a fixture in the Los Angeles and Worldwide House Music community and his ‘House Music’ track was highly acclaimed by artists such as Carl Cox, Danny Tenaglia, Deep Dish, Frankie Knuckles, Roger Sanchez, Pete Tong, and numerous others. He has released on labels such as Strictly Rhythm, Ovum, Azuli, and in 2005 he was signed to Netherlands most illustrious label, ID&T.

In 2007 Eddie’s remix of Madonna’s ‘Give It To Me’ reached number 1 on Billboard’s Hot Dance Club Play Chart. He has also remixed Yoko Ono, Alanis Morissette, Donna Summer, Chris Willis, Jason Derulo, and many more. In 2013 he released ‘U Make Me Wanna’ that reached #13 on Billboard’s Hot Dance Chart and ‘Arrow Through My Heart’ that reached #12 on the label in which he co-owns, Citrusonic.

Eddie has already started off 2015 strong with a release out on Uniform Inflow and releases scheduled for Subliminal and Pacha Recordings. On February 8th of 2015, Eddie will fly into LA for the 57th Annual Grammy Awards which will be telecasted around the world from the Los Angeles Staples Center.