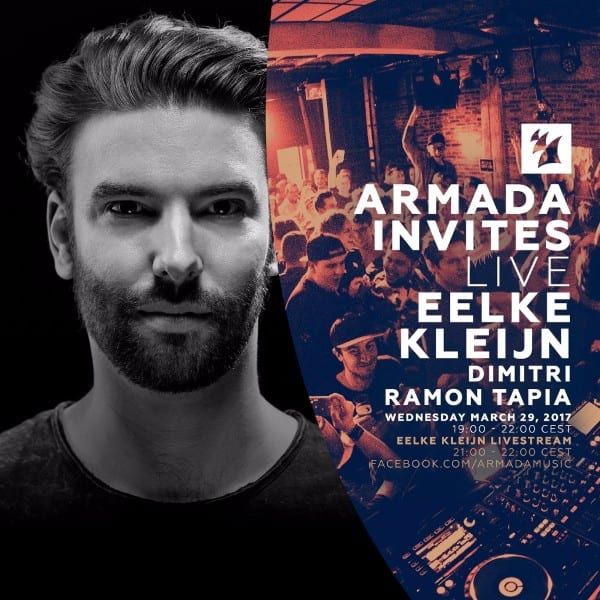 Hot on the heels of its fourteenth edition in Miami, ‘Armada Invites’ is back on home turf with another installment. On March 29th, none other than Eelke Kleijn, Dimitri and Ramon Tapia will fill out Armada Music’s in-office club with their signature vibes during ‘Armada Invites: Eelke Kleijn’, which will be broadcast live on Armada Music’s Facebook page and YouTube channel from 7 to 10 PM (CEST).

Eelke Kleijn heads the line-up of this fifteenth edition of ‘Armada Invites’. With work stretching across film scores, international shows and incredibly well-formed productions, the modern-day composer is a celebrated DJ and producer who keeps on hitting new highs. Having just launched his DAYS like NIGHTS label as a new platform to release his hyper-melodic and avant-garde productions on, Eelke Kleijn is poised to turn this edition of ‘Armada Invites’ to his hand.

Dimitri is one of the few able to bridge the gap between different generations of dance music addicts. Steeped in electronic music for over thirty years, the Dutch pioneer stands tall as a trailblazer and is set to show off the full extent of his legendary mixing skills.

Known for forging a new-school Techno sound that blends to the slower, sexier sounds of his contemporary vibe with the legacy of the genre, Ramon Tapia has always been one to let the music do the talking. He’ll do just that as he takes up Armada Music on its offer and gets ready to turn The Club! into his personal playground.

‘Armada Invites’ is a recurring event in Armada Music’s own in-office club in Amsterdam, comprising exclusive showcases from some of the biggest and most talented artists in the world. The event reaches a worldwide audience through its livestream on Armada Music's Facebook page and YouTube channel. World-renowned artists such as Erick Morillo, Armin van Buuren, Lost Frequencies, Gareth Emery, Cedric Gervais, NERVO and Borgore already served as headliners in previous editions of ‘Armada Invites’.