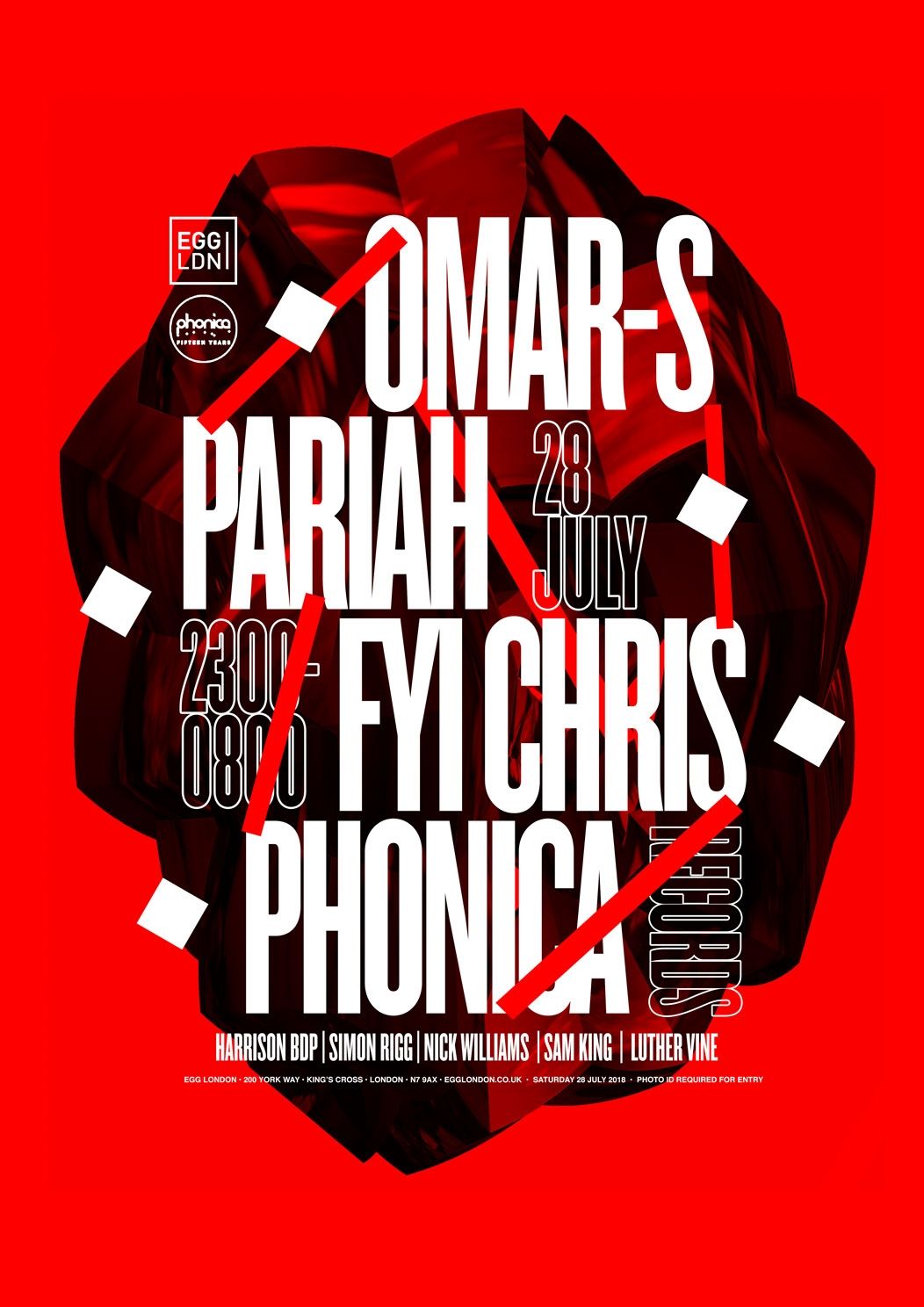 Currently one of the forerunners of Detroit’s electronic music scene, Omar S returns to Egg LDN alongside the Berlin-based Pariah and Rye Wax’s own FYI Chris. It’s been four years since Omar-S played at the club and since then, the outspoken artist has released a plethora of punchy house and techno rhythms on his own imprint, FXHE Records. A celebrated selector and internationally renowned producer, Omar’s approach to his craft is notoriously matter-of-fact. Having a no-frills approach to music – particularly techno – Omar releases the majority of his material on FXHE, and is renowned for being extremely selective when working with other artists. Ready to take reigns of our Middle Floor soundsystem, Omar’s Egg LDN return is well overdue. Playing under his Pariah moniker, Arthur Cayzer makes his Egg LDN debut after making an impact on the UK and German music communities in the last number of years. Whether he’s playing solo as Pariah or conducting a slamming live techno set with Blawan under their Karenn alias, Cayzer has proven himself to be a multi-faceted, burgeoning artist who’s graced the back catalogues of R&S Records, Curle Recordings and lots more. FYI Chris is compromised of two flourishing producers who are rapidly emerging as ones to watch in London’s electronic soundscape. Heavily involved with Peckham’s well-known record shop Rye Wax, Chris Coupe and Chris Watson can be found selling vinyl or running the stores in-house label ‘West Friends’, between gigs from London to Glasgow to Czech Republic. Keeping it local, the pair have released on Ears Have Eyes, Ninja Tune, Rhythm Section and Church, as well as DJing regularly in the intimate surrounds of the Rye Wax basement. Our resident, Kyle E completes proceedings for the Middle Floor with a delectable library. Harrison BDP and Phonica residents complete the billing, each of whom will host the Ground floor with a wealth of classic and contemporary house, techno and electro cuts between them until late. Ears Have Eyes is a record label run out of South East London by two friends, Miles and Joe, focusing on the weirder end of house and techno music. Starting out as a regular party at an under the radar venue in Whitechapel in 2009, their first release surfaced in 2012, featuring the debut single from the amazing post-punk outfit Snapped Ankles. Since then they’ve gone on to work with local artists and international talent, but always looking to build lasting friendships while also pushing the music they love. As well as the Snapped Ankles their releases have featured artists such as FYI Chris, Nick Araguay and Chocky, and the guys have also held down a monthly residency on SE London institution Balamii Radio since its earliest days. For their label showcase, they’ll be inviting along a close friend and rave-collaborator Corporeal Face AKA Joe Roberts, who has just dropped an excellent release with Tone Drop Out records. This relationship goes way back to plotting illegal parties in basements across London.