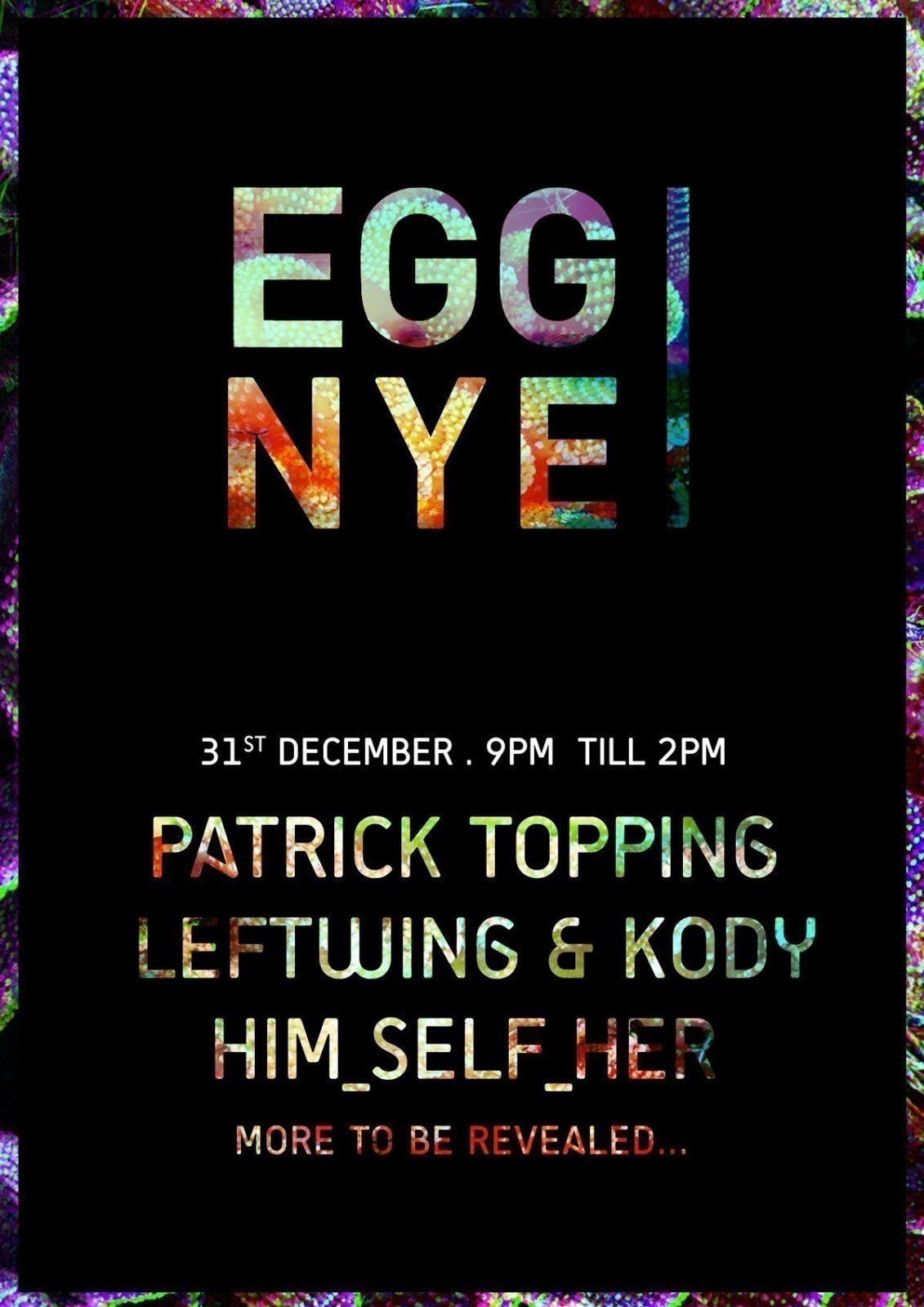 New Years Eve is that one night a year you have to get right – and you have to do it big – this year at Egg we are doing it bigger than ever! We have our Longest Ever New Years Eve Party! We have a crazy good line-up for you lot to take us on the longest ever NYE journey. We are holding our line-up cards close to our chest right now with some massive headliners in the works and soon to be revealed… so keep those eager eyes peeled – all we can say for now is it is looking good, really good. Right now we have Patrick Topping (Hot Creations) Leftwing & Kody (Lost) and Him_Self_Her (Crosstown Rebels) for what promises to be a major NYE partying experience.

2014 has been a proper good year for Egg – we have had some amazing line-ups and a load of generally crazy good parties, so we need to give 2014 a proper good send off right?! The club itself has gone through a load of major changes including – a fully updated sound and lights system, and a fully renovated roof terrace. We always go in hard on NYE – so aside from the partying sounds expect a visual spectacle including an incredible laser light show, a full production made up of huge LED screens, and Co2 cannons to transform one of the capitals leading night spots into its longest, and best, New Years Eve partying experience ever!

Patrick Topping is a talented young star from the Hot Creations label who, in the last few years, has made a major name for himself in the global clubbing sphere! If you hit up Ibiza this summer you would of heard Topping’s anthem ‘Forget’ everywhere! This guy is a house and tech chart topping maverick that is praised by all in the clubbing and music scenes – making it onto Pete Tong’s Future Stars earlier on this year. Topping has hit up Egg a couple times this year and has definitely made an impact on 2014 as a whole – we can’t wait to have him back for this NYE extravaganza!

Leftwing & Kody draw influences from many different music eras and scenes – from UK Garage to Contemporary House. Their jacking grooves, soulful synths and massive baselines have made huge impacts on the scene in recent years. The party starting duo have released a load of killer hits including the Bump & Flex EP – which in 2012 became one of OFF Recording’s most successful releases to date! Their major beats have been praised by the likes of Groove Armada, James Zabiela and Bicep! Leftwing & Kody have heated up the Egg dance floor on regular occasions this year therefore it seems more than fitting to have them return for this mega NYE party!

There is a a magical house union out there known as Him_Self_Her – this super clubbing duo infuse all elements of house that we love from deep grooves to driving tech, and everything in between. Their ever growing schedule is taking them to clubbing capitals around the world and their infectious sounds have made them regular Ibiza party starters! Their major release ‘Gone too Long’ in 2012 put the duo well and truly on the clubbing map – gaining support from the likes of Pete Tong, Jamie Jones and Solomon. From the success of Him_Self_Her it is clear to see that strength definitely comes in numbers – these two know how to bring the party – making them a must see this NYE at Egg!