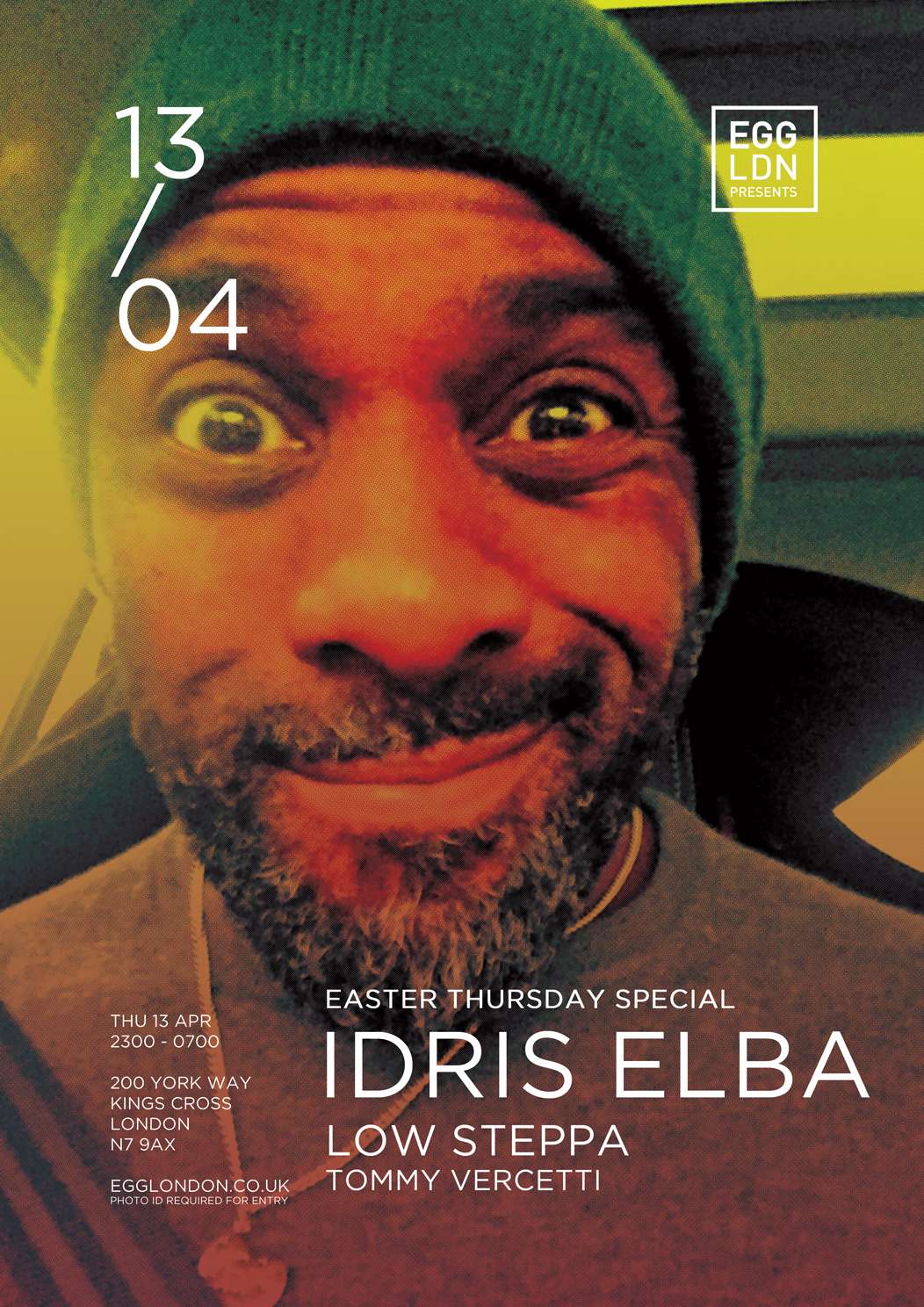 After a roadblock event last Easter, style and acting icon, Idris Elba, returns to the decks at Egg London’s Main Room on Thursday April 13th alongside the Simma man, Low Steppa
and Tommy Vercetti. This is where the Easter weekend starts…

“Elba is the kind of guy who can make the unexpected happen. A bit of an everythingist. He writes, he directs, he DJs, he raps; not so long ago he broke a landspeed driving record.” The Guardian, 2015

Anyone who's familiar with Elba knows that his roots are based firmly in music and he’s re-ignited his love for DJing with high profile sets all over the world including stints at Glastonbury, Ibiza Rocks and Pacha, Ibiza and on tour with Madonna. His passion for house, garage and bass music saw him pick up huge support for the tribal stomper, ’Spectacle’ edited by Radio 1’s Pete Tong, the first track from his Hiatus.
Best known for his acting roles which have seem him tackle everything from hardened cop, ‘Luther’ to Baltimore gangster, Stringer Bell in ‘The Wire’, as well as starring in fantasy flicks such as ‘Thor’ and ‘Pacific Rim’, a statesman in ‘Mandela: Long Walk To Freedom’ and the Star Trek movie, ‘Prometheus’. His rugged, affable charm has seen him launch his own line for clothing company, Super Dry which  He's rapped on a Skepta track as well as remixing his crossover hit ‘Shutdown’, produced his own Nelson Mandela inspired ‘Mi Mandela’ album and the ‘Murdah Loves John’ album also.

Since emerging in 2013 with his explosive bootleg of Route 94’s ‘My Love‘ having clocked up over 2.75 million plays on SoundCloud and becoming a regular feature on Kiss FM and BBC Radio 1 Xtra, Low Steppa has rapidly made a name for himself as a pioneer of the bass house musical revolution. In addition to releases on some of dance music’s most respected labels including Armin van Buuren’s acclaimed Armada and Shadow Child, Toolroom & Kry Wolf’s Food Music, Low Steppa’s label Simma Black has risen to become one of the most respected imprints around– regularly dominating the Beatport and Traxsource He continues to host a monthly show on Rinse FM every third Friday of the month from 1am.

Sharing his name with the main character from Grand Theft Auto: Vice City, Tommy Vercetti (aka Tom Cox) is barely out of his twenties but has already secured his reputation as a rising star thanks to releases on Do Not Sleep, Simma Black and Definition. Already tipped in Eton Messy’s Top Five to watch, expect his name to become ubiquitous in 2017.