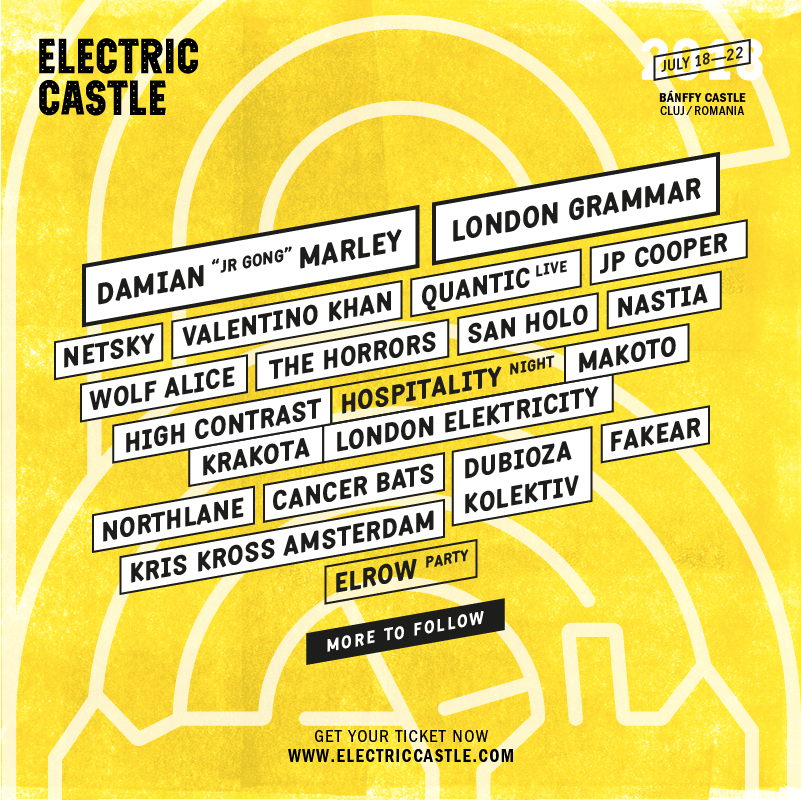 For the first time, The Hangar stage will host takeovers from the most awarded party concept in the world, elrow and music heavyweights Hospitality Records

After the huge success of its fifth anniversary earlier this year, Electric Castle will return in 2018 with yet another eclectic and world renowned bill of artists and performances within its breathtaking Transylvanian Castle setting. From 18th-22nd July 2018, Romania's answer to Versailles will play host to a headline performance from reggae superstar Damien Marley, alongside London Grammar, Netsky, Wolf Alice, JP Cooper, The Horrors, High Contrast, Cancer Bats and many more. For the first time the legendary The Hangar stage will host the most awarded party in the world, elrow, bringing its imaginative and immersive party experience to Banffy Castle, as well as a dnb masterclass from Hospitality Takeover with London Electricity, High Contrast, Krakota & Makoto, MC Dynamite and Ruthless MC. Spanning across seven unique stages, Electric Castle will welcome back over 100,000 revellers for an incredible five days of music, food, yoga, cinema and so much more. First release tickets are available now starting at an impressively affordable £72 and £89 with camping. Further information can be found here.
Electric Castle takes place in the spectacular surroundings of its Transylvanian Banffy Castle next to Romania's vibrant city of Cluj.

Heading up the main stage for 2018 and bringing the sounds of Jamrock to Romania will be reggae royalty Damien 'Junior Gong' Marley, son of the Godfather of reggae himself and recent winner of the 2017 MOBO Award for Best Reggae Act. Elsewhere, English trio London Grammar will be bringing their hauntingly beautiful vocals and emoti-pop bangers to the bill, alongside other epic performances from singer conger writer JP Cooper, Drum and Bass legend Netsky, London rockers Wolf Alice, hardcore punks Cancer Bats, Valentino Khan, San Holo, Kriss Kross Amsterdam, Quantic Live Band and many more to be announced.

For the first time this year, Electric Castle's spectacular The Hangar stage will also play host to two of the most widely recognised and celebrated nights in the world. Drum and Bass heavyweights Hospitality Records will be taking over proceedings for an evening, accompanied by the likes of London Electricity, High Contrast,Krakota & Makoto on the decks and MC Dynamite and Ruthless MC on the mic. On top of this, the undisputed kings of partying elrow will be bringing their incredible immersive experience to Romania. Expect soaring spectacles, floods of confetti, bizarre props with thousands of revellers dancing to the beat of the best, up and coming DJs in the world.

elrow will take over The Hanger stage
A unique and mind-blowing experience, the festival shakes up the way people interact with music by combining a visually innovative production with an eclectic musical line-up. During the day, festival goers can take advantage of a host of activities including a tech park with presentations of the latest in the virtual reality, Internet-of-Things and gaming areas. 3D projections feature throughout the festival to transform the area into a futuristic landscape.