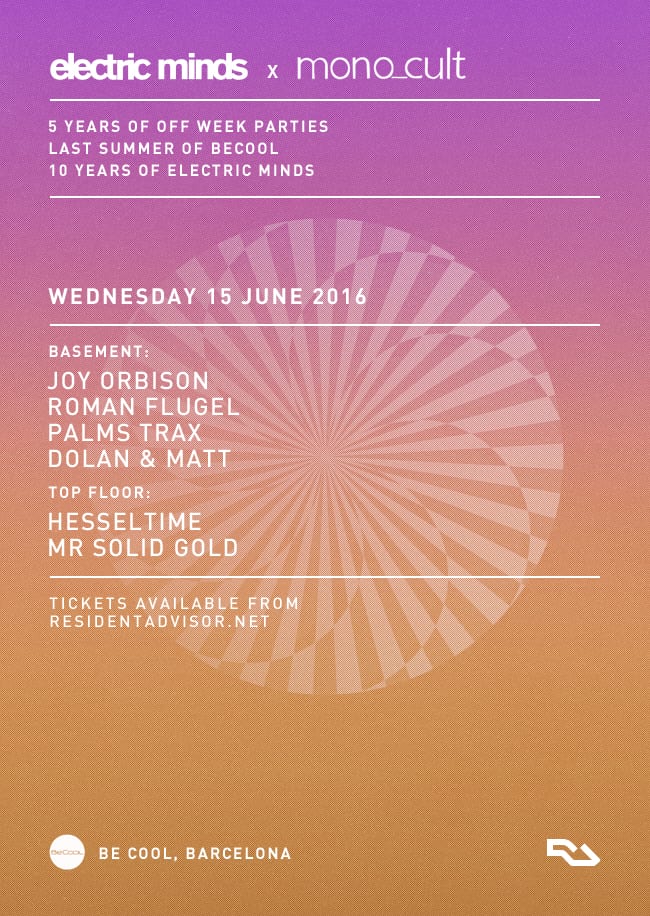 electric minds join forces with mono_cult as they continue their tenth anniversary celebrations and return for the fifth year to host their annual Off-Week party at Barcelona music institution BeCool.

Having firmly established themselves as a true highlight in the Off-Week programme, which traditionally runs alongside Sonar Festival, electrics minds present a lineup of impeccable standards headlined by Joy Orbison. The notoriously enigmatic producer is bestowed with a rare ability to connect with the dancefloor, seamlessly weaving beats from the freshest cuts to forgotten gems.

Providing the soundtrack for BeCool's top floor are the master-minds behind two of London's most respected and forward-thinking event series; Teif's Hessletime and Trouble Vision's Mr Solid Gold.

Much-loved Barcelona night-spot BeCool recently announced that 2016 is to be their final season, making electric minds and mono_cults off-week party an unmissable opportunity to enjoy the club, at it's best, before it closes it's doors for the last time.

As this event has sold-out in advance every year, party-goers are advised to move fast to avoid disappointment.