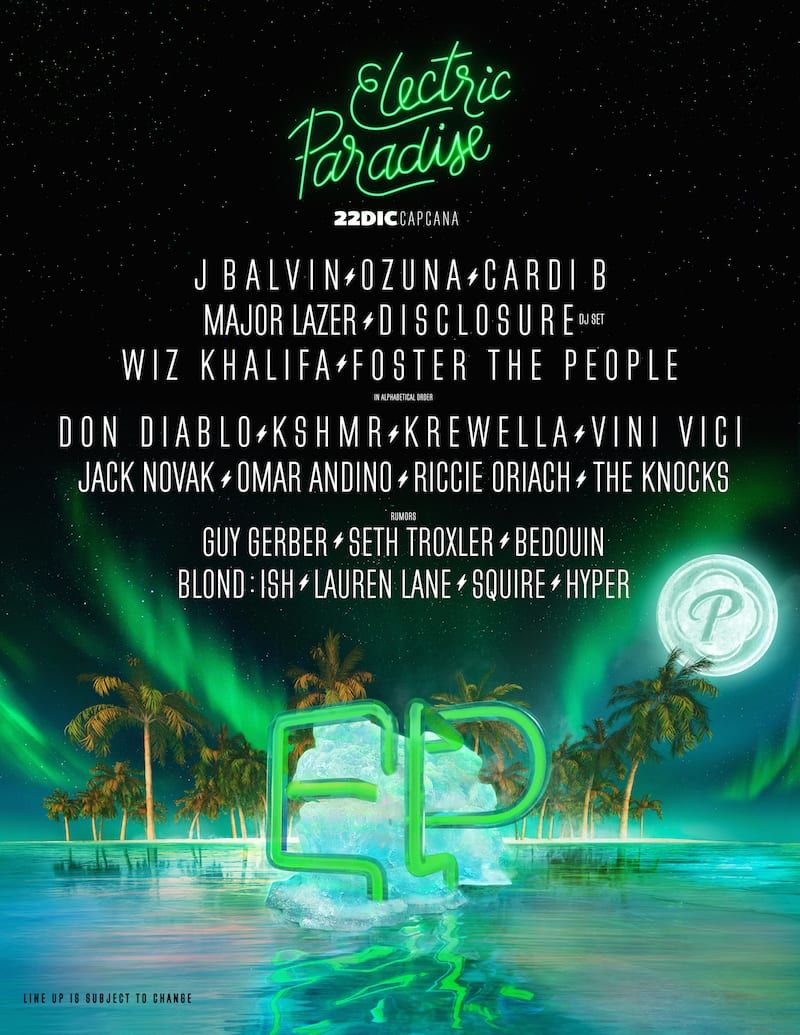 Welcoming a selection of electronic, urban and hip hop music’s biggest names to the Dominican Republic this December, Juanillo Beach in Cap Cana will be the destination for Electric Paradise Music and Art Festival. Widely recognized as one of the most beautiful beaches in the world, the golden sands ​of Juanillo will house an array of party goers in idyllic conditions with J Balvin, Major Lazer, Cardi B, KSHMR, Don Diablo, Ozuna, Wiz Khalifa and Disclosure performing at the sun-soaked paradise.

Considered by international media as the “UP & COMING” festival, with the tagline, “the dream is real", Electric Paradise Music & Arts Festival will partner with iconic local Dominican beer Presidente. This year’s edition will bring fresh new experiences to the island, involving gastronomy, art, technology and innovation, where thousands of people will join to live a night where their dreams will become reality.

Acting as the 4th installment of the event on Dominican soil, the 2018 edition of Electric Paradise ​is sure to amass a huge crowd of music lovers looking to escape their snowy December for the warm conditions of Punta Cana. Laced with a mix of top street chefs offering the finest culinary treats from the Dominican Republic,​ Electric Paradise​ is calling you!

Tickets are available to purchase today, October 11th, at www.electricparadise.com

Run by the producer Pablo Pou, PAV has been hosting, producing and creating events for the past 20 years, including the largest festivals in the Caribbean. This includes Festival Presidente 2017, where artists such as Justin Timberlake, Marc Anthony, Enrique Iglesias, Bad Bunny, Ricky Martin and others performed. PAV has produced Barbarella Festival for the past 6 years, where EDM’s hottest acts such as The Chainsmokers, Zedd, David Guetta, DJ Snake, Jack U, Afrojack, Steve Aoki, Empire of the Sun, and Capital Cities were headliners. PAV has also promoted and produced concerts for Calvin Harris, Rihanna, Snoop Dogg, Jon Bon Jovi, Marc Anthony, Juan Luis Guerra, Alejandro Sanz and Enrique Iglesias among many others.