Electro-pop duo SACRE will be sharing their next track, ‘05:00AM JUNGLE CHASE’ which has been taken from their forthcoming album, LOVE REVOLUTION, which will be part of SACRE’s exciting project that harnesses music, photography and storytelling. The track was premiered via Complex Magazine. SACRE has already gained extensive support for their music from a host of tastemaker TV channels including Canal+ France, YouTube channel La Belle Musique, as well as radio stations such as Beats 1 with household name Pharrell Williams and popular French station Radio FG and have collaborated and worked with top musicians such as Gigamesh, ELEPHANZ, CHOPSTICK & JOHNJON, Uppermost and Kraak & Smaak to name a few. SACRE has also garnered support from acclaimed publications such as HuffPost, Billboard, COMPLEX, CLASH Mag, EARMILK, Impose, Magnetic Magazine, Acid Stag, and many more. Currently, the pair sit at roughly 3 million plays across streaming platforms.

Featuring slick basslines and rhythmic tribal beats, ‘05:00AM JUNGLE CHASE’ creates its own little world. A darkened club springs to mind, occasionally lit up by flashes of light revealing a thriving crowd. The smooth female vocals that radiate throughout the song act as a beacon of femininity, contrasted with the occasional roar of masculinity that appears. As a result, the track carries a flirty “push and pull” quality to it, establishing the dance of courtship in throbbing dance music.

Speaking of the concept behind the music, Sacre tell us: “We imagined Jungle Chase as a soundtrack for the chase in our story. For the moment when the little witch and her mean brother are trying to get the stone back. A death hunt on the road. As we did for every song in Love Revolution, we looked for a more pop-oriented subject that would fit our story. So the lyrics are about the chase between a “saturday night sex hunter” and his prey.  It takes place in a club where the prey appears as a doe and first seems scared…” 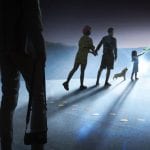