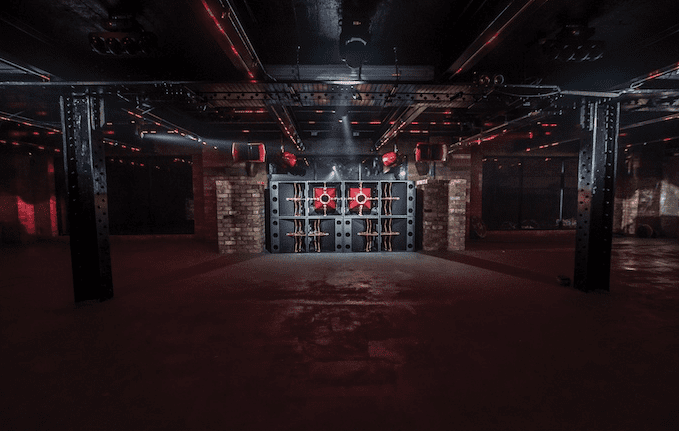 In these polarised times seeking direction, it's the literal middle ground of Birmingham – the country's beating heart, connected nationally and internationally by road, rail and airport links – that there's a new club drawing together the best of British and worldwide talent.

[ scru:club ] is rooted in history, housed in a grand three story building in Digbeth where Ephraim Phillips created the first Phillips Screw. Yet everything about it has been designed with an eye on the future, from its pioneering line-ups to the level of detail that's gone into creating a space that's inspired by many, but matched by very few.

Across the entire club, a glass back wall overlooks the River Rae. With each party built around a specific concept, bespoke 3D mapped visuals will be projected onto the adjacent warehouse's wall. As morning light floods [ scru:club ], it will then reveal the club's own Hall of Fame painted on the same wall by local street artists. Other visual artists and sculptures will also exhibit their work throughout the venue, ensuring that [ scru:club ]'s interior is constantly evolving and showcasing talent from across Europe.

Season One, which takes place across March and April, sets the bench-mark for [ scru:club ]'s innovative and inclusive programming, mixing huge brands with rising talent and world exclusives to leave no stone unturned. From its visuals and flyers through to decor, each party is individually designed thanks to [ scru:club ] working in collaboration with the labels and artists involved.

Friday nights are all about bass, programmed by in-house promotion Continuum. From the opening night, when mysterious masked London MC CASisDEAD headlines alongside the country's hottest grime DJs (March 17th), boisterous Manchester collective LEVELZ in the Phillips Room, Continuum joins the dots between bass music's ever growing, intertwining strands. Night Slugs arrive in full force for a takeover (March 24th), Nottingham's Krudd highlight the bassline revival with Marcus Nasty (March 31st) alongside The Heatwave and Zed Bias in the Ephraim Room, and April kicks off with a mighty double-header from Swamp 81 and Exit Records (April 7th). The first of many artist relationships, Mumdance follows (April 14th) as the first in Resident Series, a spotlight on some of [ scru:club ]'s favourite acts, inviting an all-star cast of Shed, Andy Stott and Logos to join him.

House and techno find their home on Saturday night, with the mighty trio of Valentino Kanzyani, Barac and Priku christening room one (March 18th) with a world exclusive, first ever eight-hour back to back to back set. Cocoon add [ scru:club ] to their globe-trotting schedule (March 25th), a huge visual spectacular show accompanying special guest Steve Bug and a rare live set from Tim Green, tipped as one to watch in 2017, before Ultramajic's Jimmy Edgar showcases his artistic skills across both the club's sound system and 3D mapping with special guest Honey Dijon (April 1st) while Magda plays a special sunrise set from 4-10am in the Ephraim Room. There's a history lesson in acid house when the Hacienda present 808 State live show and DJ Pierre (April 8th), and a special, themed 12-hour Crew Love showcase unites Soul Clap and Wolf + Lamb playing back to back. Season One ends with another world exclusive as Mandar, aka Lazare Hoche, Malin Genie and S. A. M., make their debut playing a special six-hour back to back to back set.

These are just some of the highlights of Season One. [ scru:club ] then goes into Season Two with the next phase of its overall development completed: the addition of a huge indoor garden bar lined with vines and lit, as morning breaks, through sky lights in the roof. This is followed in mid-summer by Phase Three, in which the club's car park will be converted into one of the biggest outdoor terraces in Europe, raising the capacity to 4000 and allowing for parties that run all-day outside then all-night inside.

Just ten minutes walk from Birmingham New Street Station, [ scru:club ] aims to join the ranks of Europe's must visit clubs, providing a unique, stand out experience for techno tourists. As such it operates a strict no camera policy, each party destined to only live on in the memories of those who were there.

Club goers can also enjoy a discount on hotels and travel to the venue. More information is available via the [ scru:club ] website.