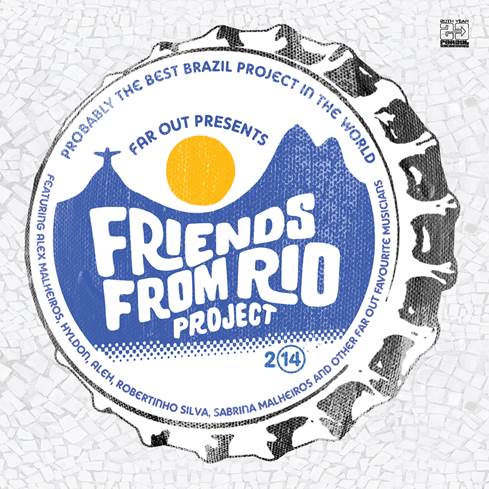 With an all-star line-up of the label’s closest friends (as well as some new faces), Friends From Rio Project is a fresh take on Far Out’s original idea of recording music from Brazil – aimed at the dance floors of London and beyond.

Friends From Rio was one of the first projects the label undertook way back in 1994 and after 20 years, Far Out is back with this new release of varied, yet consistently danceable bossa grooves, Brazil funk and scorching batucadas.

It’s just the kind of music that has defined the label over its two-decade history, which makes it the perfect way to mark 20 years of Far Out Recordings.

In keeping with the very ethos of Far Out, The Friends From Rio Project cements the bonds originally welded by a young Joe Davis  (the Far Out founder), when he set off to Rio, in search of the mysterious sounds of Brazil.

Coming from the heart and soul of Rio de Janeiro, the album features some of the most accomplished heroes of Rio’s musical underground, including Alex Malheiros, Hyldon, Aleh Ferreira, Robertinho Silva, Sabrina Malheiros and a host of other Far Out favourites.

Consisting entirely of original material (with the exception of a blistering version of Jorge Ben’s timeless ‘Mas Que Nada’), this is a reunion of old friends and that’s exactly how it sounds, with celebratory whoops and whistles littering the album, it really does sound like a party.

Every track is in some way reminiscent of the kind of music Joe Davis and friends were playing on the underground club scene in London, back at the time of the first Rio Project.

While principally a Brazilian record, lofty disco synths and funk basslines take tracks ‘So Resta A Porta’,‘Veneno’ and ‘Fogo No Chao’ beneath the lights of a spinning mirror ball, while samba batucadas and fiery brass sections keep ‘Casino Bangu’ and the fantastically funky ‘Leite De Pedra’ under the Rio sun.

“We’ve always tried to keep the music dance-floor orientated, but it’s sometimes hard to get musicians to play in the same style and with the same feel as they perhaps had in days gone by. Over the last 20 years, our relationships with some of these legends has really developed through sharing musical ideas, and this understanding really comes out in this Rio Project, enabling us to get exactly the results we wanted while recording the album. It was a real team effort; Daniel Maunick, Alex Malheiros and I were all on the same page, ensuring that the groove was imbedded in the music first and foremost.” Joe Davis

Nostalgia balanced with vitality is inherent throughout, punctuated by the artwork, which is based on the bottle cap of the 60s/70s Brahma Guarana. Yet while the album is something of a reunion, finally managing to work with renowned Brazilian artists Hyldon, Aleh Ferreira and others was an opportunity Far Out couldn’t miss. It’s collaborations with legends like these, with the flare of Azymuth’s Alex Malheiros, the direction of Label boss Joe Davis and the production of Daniel Maunick that makes the Friends From Rio project the truly special record it is.