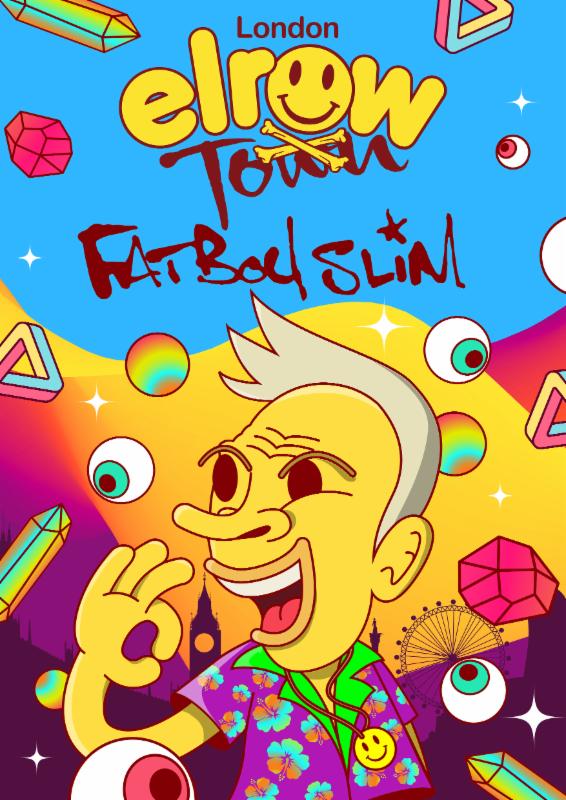 elrow is collaborating with one of the worlds most iconic DJs to create a special and unique show. Fatboy Slim has been unveiled as mammoth headliner and collaborator for a truly unmissable spectacular for elrow Town London at Queen Elizabeth Olympic Park on Sunday 19th August 2018.

One of the most legendary figures ever to grace elrow's decks, Fatboy Slim will be wowing crowds at elrow Town London with a truly electrifying, never before seen show. With three decades of DJ excellence under his belt, Norman Cook was instrumental in bringing dance music to the masses with his formidable arsenal of feel-good house that helped shape the face of club culture as we know it today.

He's bringing more than just the tunes, however. In a unique first, elrow's Sambodromo do Brasil and Psychedelic Trip themes will collide with Fatboy Slim's special production to deliver a truly unforgettable collaboration that will take the celebrations to new heights. it is the first time that elrow is hosting a headline show for an artist such as Fatboy – watch out for an extra-special show that is curated in collaboration.

In anticipation of his performance, Norman said: "Our paths hadn't really crossed  as I was always in Ibiza on a different day to them, but then we bumped into each other at Glastonbury and we became good friends. And that friendship will be cemented at The Olympic Park East London!"

With tickets for Saturday 18th August 2018 featuring Paul Kalkbrenner, Richy Ahmed and Steve Lawler already sold out, expect demand to be similarly high for what is an unmissable party at the Queen Elizabeth Olympic Park.

Sign up for access to presale on Wednesday 7th March. Remaining general release tickets will be available on Friday 9th March. https://www.elrowtown.com