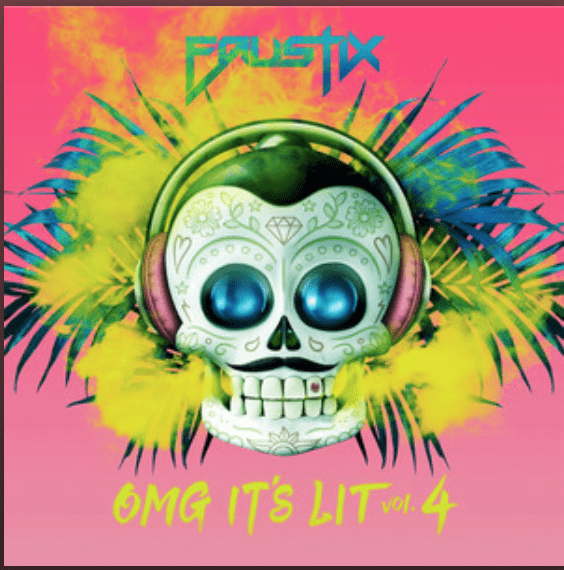 The EP comes just before his performance at this year’s Tinderbox Festival – one of many shows announced as part of his summer tour. The inspiration behind this EP came from playing shows in the Spring whereby Faustix really felt the energy from each audience when playing his more psy-trance tracks.

The track ‘Solo’ (from Vol. 3 of the series) especially cleared the way for Faustix to work more in that direction. However, the sound of Vol. 4 has more big-room elements and increased tempos which work really well in Faustix opinion.

The ’OMG It’s LIT’ series is an important break for the experienced producer, who also works closely to the pop side of dance music. This is especially the case for Faustix when he is playing live and he has some hard tracks to drop. The series is also crucial for Faustix’ creative role in the studio as this is a place where he can play and challenge himself in a different manner.

The real essence of all the tracks of ‘OMG It’s LIT Vol.’ is similar to the previous series; it is all about capturing a certain vibe. On Vol. 4 Faustix had several pieces of melodies in mind, then it wasn’t long before they were produced and ‘OMG It’s LIT’ Vol. 4 was created.

Aside from the EP release, Faustix will have played more than 30 gigs all around Denmark throughout the summer (including this year’s Tinderbox Festival and Smukfest). Faustix also promises to release a follow-up to his big commercial hit ‘Thorns’ before the summer ends and maybe even start working on a Vol. 5 of his OMG IT’s LIT series.

Over the years Faustix has made his mark in the music scene with over 86 million streams on Spotify alone, on releases including a production-collaboration with Diplo on the smash hit ‘Revolution’ (which became part of the Bernie Sanders presidential campaign), his hit single ‘Crying In The Sun’, which has already achieved more than 10 million streams, and a remix of the official UEFA EURO 2016 song by David Guetta and Zara Larsson. He has also done remixes for the likes of Chris Brown, Icona Pop, Major Lazer, and recently Slushii & Sofia Reyes’s ‘Never Let You Go.’ Over the past year Faustix has started up his EP series ‘OMG It’s Lit’, releasing Vol.1, 2, 3 & now 4 – the series is a tribute to club music and has received massive support from DJs such as Diplo, Alvaro, MORTEN and Snavs.