Felix Cartal Gives Producers a Chance to Create Their Own Beats And Win Over $10,000

Felix Cartal Gives Producers a Chance to Create Their Own Beats And Win Over $10,000

Calling all aspiring producers: Felix Cartal just announced his Chopped Up Challenge, a four-part musical battle featuring over $10k in prizes from sponsors Native Instruments, Pioneer, and SKIO Music as well as prizing in the form of cash, Felix Cartal’s merchandise, Amazon Studio Echoes, and more. Beginning on February 18th and running through March 11th, the challenge invites all producers to take a given week’s vocal acapella sample and put their own spin on it by making a 1-minute track. Felix and guest judges – Kaskade, Zedd, TOKiMONSTA and Dr. Fresch, will take it to Twitch to listen to all submissions live until a winner is decided and prizes are awarded. Sign up for the Chopped Up Challenge here and let the game begin! The first vocal chop to work on is available on February 11.

With over 300 Million Spotify plays and counting, Vancouver based Felix Cartal has three platinum singles “Get What You Give“, “Love Me,” and “Mine” under his belt, as well as the award for Dance Recording of the Year at the Junos 2020. His music has been featured on major Youtube channels Trap Nation, Mr. Suicide Sheep, Mr. Revillz, Chill Nation, Selected, and xKito amongst others, accumulating over 90 Million views. He has also seen support from BBC Radio 1‘s Danny Howard and Diplo & Friends and SiriusXM Chill has also heavily supported several singles, while his Weekend Workout radio show was featured on Sirius XM Diplo’s Revolution. Felix has collaborated with several major artists such as Kaskade, R3HAB, and Gallant; additionally, he has created official remixes for the likes of Selena Gomez, Zedd, Galantis, Dillon Francis, MØ, Ellie Goulding, Diplo and more recently, Anne-Marie & Doja Cat as well as Daya & Shallou‘s “Older.” 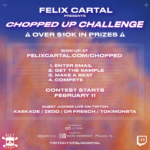