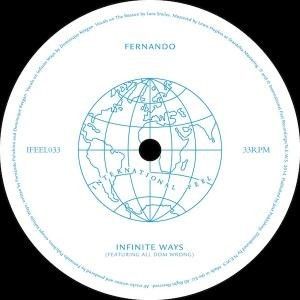 The artist known as ‘Fernando’ once washed up on the shores of Uruguay after a freak boating accident off the coast of Carilo, Buenos Aires in 2008. An incident that occurred while on a submarine studio mission conducting sonic experiments aboard a renovated and highly customised U-boat circa 1945. Free from constraints and operating outside territorial waters, Fernando was putting the finishing touches to a new collection of music, setting out to bottle those sweet and indescribable moments in suspended time and space when we feel weightless and surrounded by sounds richer than reality…. an inexact science, yet a universal privilege that life and ears afford us. Presumed dead, what in fact happened was a serendipitous encounter between the lucky survivor and a roaming associate of International Feel, who, during a walk along the sands of Punta Del Diablo, found an airtight USB stick clutched inside the hand of a partial amnesiac, dazed and shivering but with a sly smile stretched across his sun and sea worn face. It seems that whatever Fernando was looking for, he had found and thanks to the saviour of that day and (much further down the line) Fernando’s blessing, it sees the light of day on October 13th, 2014 in all good record stores.

Since the ‘discovery’ of Fernando, the producer, DJ, multiinstrumentalist and singer songwriter has released on wellloved labels such as Gomma, Internasjonal, 2020Vision, Leng, Redux, Under the Shade and Bearfunk, where last year he released his debut album ‘Float’ becoming a firm favourite of DJ Harvey in the process. As well as releasing as Fernando, he’s also played with pillars of UK dance music 2020Soundsystem and electronic duo Silver City.

The ‘Infinite Ways EP’ is a spaced out disco odyssey where sleazy NY disco meets the modular growl and unforgettable dub melody of Martin Rushent circa The League Unlimited Orchestra’s ‘Love and Dancing’. Striking the chord between nostalgia and cutting edge discoid diamonds, human voice and machine, all three cuts are sincerely seductive, understated anthems. Hypnotic, melting structures of familiarity free flowing into the unknown…

NYC dweller and vocalist All Dom Wrong was part of the remastering studio sessions that took place in 2013 where ‘Infinite Ways’ became what it is today. Promising London talent Lara Smiles lends her satin vocal magic to ‘The Reason’ and the EP is completed by the trippy Kerouac and Burroughs-esque imagery of ‘Road Music’.